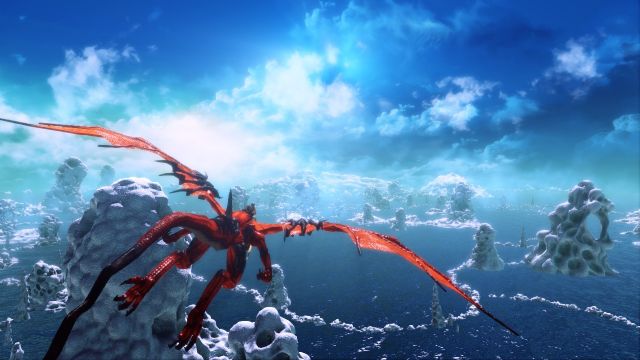 The thought of strapping yourself to the back of a mythical beast may sound fun, but most of those stories involve death, destruction and more than their fair share of turning people into stone. If, like me, you prefer to keep your magic animal riding strictly to Kinect, then you are in luck.  The spiritual successor to Panzer Dragoon, Project Draco, has announced 3 player online co-op.

Details are slimmer than a knight's chances against a dragon, but there will definitely be a 3 player co-op aspect the game.  Whether this will be the main campaign or a separate 3 player mode is unknown.  What is confirmed is that the co-op will be online only; I'm afraid two dragon fanciers won't be able to play in the same room.

1UP were able to get some hands on time with the game during the Tokyo Game Show and highlighted a few things:

First impression is it's super colorful, with some interesting virtual pet features, three-player online co-op, and controls that are really similar to Child of Eden's.

Before today, I knew nothing about this game other than it was a Kinect title, so it was a damn pleasant surprise to see that this is basically Panzer Dragoon Kinect. And while the aiming-and-firing mechanics are like Child of Eden, one area that Draco differs is movement. You shift your body weight around to steer the dragon left-right and high-low (the latter feels somewhat like a plane, in that you bend backwards in order to "pull up").

As well as the 3 player online co-op being great news, confirmation that Project Draco basically plays like Panzer Dragoon Kinect is excellent, especially for anyone who owned one of those games "back in the day".  To add proof to this dragon based pudding, the below video has more than its fair share of the Panzer about it: