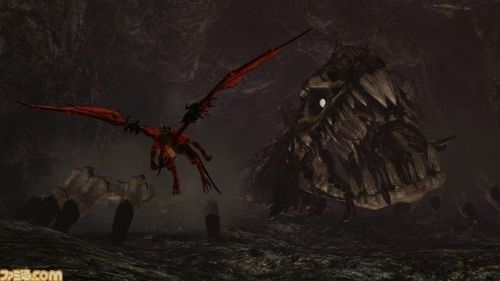 I don't know why companies still insist on creating code names for their products before coming out with the official title; I was happy with the Nintendo Piddle, before they changed it to the Wii. The latest name change surrounds the spiritual successor to Panzer Dragoon. Project Draco shall now been known as Crimson Dragon. Along with a new name, some equally new details are beginning to appear about this elusive exclusive for the Xbox 360 Kinect.

Crimson Dragon  was playable at the recent Xbox 10th year anniversary fan event in Japan. Famitsu were on hand to play the game and luckily for us Andriasang to translate. Although no new details of the co-op elements of the game appeared, there was a write up on how you use Kinect to control the dragons:

The game is a rails shooter, so you automatically progress forward through the stage. Your movements translate to direct movements by your dragon. You'll need to move around to avoid obstacles and incoming attacks.

These details certainly suggest that the game will play like an unofficial follow up to the Panzer Dragoon games. No mention was made of the co-op, but earlier previews support the concept of a 3 player online co-op mode. How this will work with all the players on rails, and on Kinect, is a mystery - Kinect Adventures, but with added flames?