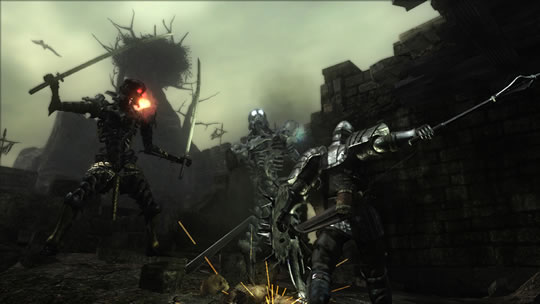 Demon's Souls refuses to go gently into that good night.  The painfully difficult action RPG was originally scheduled to have its servers shut down this October.  While this would have had no impact on the offline portion of the game, the much loved/hated online components would have been forever lost, ending the player messages, bloodstains, co-op, and PVP which have made the game so successful.  Atlus has decided to continue server support until 2012.  A wise decision, considering the newfound interest that is sure to come from the release of Dark Souls, the sequel/not a sequel to Demon's Souls.

If you haven't played Demon's Souls yet, I'm not afraid to say you are missing out.  Despite the game's difficulty there is a lot to love.  For $20 dollars, it's an absolute steal.  We gave Demon's Souls a general score of 4.5 out of 5 in our Co-Op Review.  While it didn't earn high marks as a co-op title- (Mainly because cooperative play opens up a chance for hostile player invasions, effectively turning the co-op experience into a versus multiplayer, which is not co-op.  And then there's the difficulty of actually playing with you friends... but all of this adds to the overall experience of the game... Oh, just go read the review.)  -the overall game is superb.  Along with continued server support, Atlus plans on having Pure White and Pure Black World tendency events this holiday season.  For more information you can check out the official Demon's Souls site.

Demon's Souls is out now, exclusively for the PlayStation 3.  It supports three player online co-op.  And it's only $20 bucks.  New.