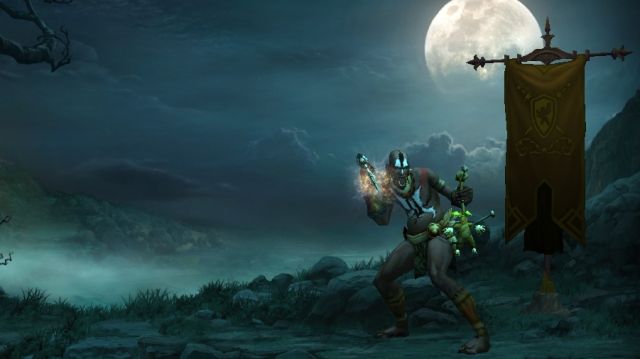 This week, Co-Optimus staffers are sharing their thoughts on the Diablo 3 beta.  Every day, a new class will be covered, and today I've got all the details about a fun and flavorful hero, the witch doctor.

As a class, the witch doctor most closely corresponds to the Diablo 2 Necromancer.  That hero's powers were  included summoning undead minions and debuffing enemies with curses, poison, and other nasty stuff.  The witch doctor carries on this tradition, with these same general types of abilities.  In my opinion, though, the witch doctor is far more interesting, packed with flavorful abilities that might just cause you to shiver from the sheer creepiness of it all.

One of the earliest witch doctor skills is the ability to summon zombie dogs.  A pack of three shambling, emaciated mongrels emerges from the ground, and clumsily follows after the witch doctor.  They move to intercept any enemies that enter their range, and though they don't do much damage, between the three of them, they make very effective meat shields.  The witch doctor can let the deranged dogs do their thing while standing back and casting all manner of voodoo nastiness on his foes.

And there is a huge variety of icky stuff available for the witch doctor to use.  It's as if the designers got together, made a list of things that make people scared and/or uncomfortable, then used the list to build the witch doctor skills list.  A wave of poisonous toads or a set of spiders hatched from a rotting corpse are two good examples.  Perhaps the vilest looking of the attacks is the zombie charger, a green, gloppy undead that rushes forward and falls into a messy puddle after dealing poison damage to foes in its way.  Disgusting?  Absolutely, and very evocative and enjoyable to use as a result.

Another useful witch doctor ability is Haunt, where a wispy spirit is summoned, doing damage over time and chaining from one enemy to the next.  The witch doctor can also use Horrify, an attack which causes nearby enemies to flee, good for when you get surrounded without your dogs nearby.  Another fun and extremely useful skill is Hex, which summons a fetish that turns enemies into chickens!  It's perfect for crowd control, since chickens cannot attack (obviously) and take extra damage, to boot.  You just can't beat the witch doctor when it comes to the flavor and theme of the skills and abilities.

I really ennjoyed my time spent playing as the witch doctor.  The powers and abilities are incredibly flavorful, and there are a host of different options that ensure you'll never get tired of clicking on bad guys.  As Mike said yesterday, early 2012 seems like it cannot get here fast enough.