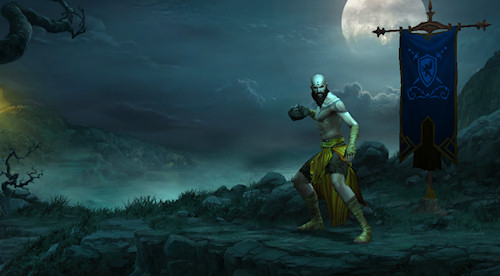 If you've been following the series this week, we've been focusing each article on a character from the Diablo 3 beta and how they play into the cooperative aspects of the game.  So far we've covered The Wizard and The Witch Doctor.  Today our focus is on Diablo 3's Monk character.

I can remember the first time I played the monk in Diablo 3, it was at PAX back in 2009.  Yes, it was over two years ago.  A lot has changed since that time, but my fond memories of the Monk made him an easy choice for my first play through of Diablo 3's beta.

In terms of how the Monk handles, he's definitely a fast and agile class with some minor support abilities, he's a lot like the Assassin from Diablo 2's expansion with a mix of Paladin with a dash of Druid.  He's going to be a damage dealer for the party, getting up close and personal with enemies - but it's his speed that's the difference maker from the Barbarian, the other damage dealing class.

The Monk has three sets of abilities - Spirit Generators, Spirit Spenders and Mantras.  Generator abilities are attacks that will add Spirit to the Monk's pool which can then be used on Spirit Spender attacks.  Spirit Spenders are generally more powerful attacks and abilities that will consume your spirit well.  Mantras on the other hand are the perfect co-op addition, while one is active you can buff not only your own character, but your entire party.

The two Mantras available in the beta are Mantra of Retribution - which reflects damage back at attackers and Mantra of Evasion - which gives everyone a dodge bonus.  These are active for a short period of time and then have a short cool down before they can be used again.  Already you can see the Monk is shaping up to be a great co-op character, he even has a healing ability called Breath of Heaven. The other thing that makes the Monk great for co-op his his ability to draw enemies in.  Using Dashing Strike, which warps your character a short distance in the direction he is facing, you'll be able to take on larger groups of enemies and keep yourself from getting hit quickly.  The combo I built up would use Fists of Thunder to generate Spirit, then a quick warp to the other side of the group, another one two punch with Fists and then war again.  It's like a kung-fu movie...and it's AWESOME.

The Monk has a variety of weapons available to him, but his special ones are called Hand Wraps, and you can equip one on each hand to stack bonuses of special items.  I played most of my time using this set up, but later I did acquire a sweet long staff that I used as well.

For me the Monk is an absolute blast to play.  It makes the game feel even more action oriented, like there's a dash of God of War mixed in my Diablo game.  Pulling off combos and letting me know my highest one adds an addictive layer to the game.

I echo the sentiments of my colleagues.  2012 can't come soon enough.