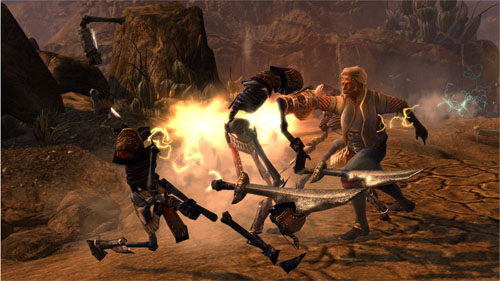 Dungeon Siege 3 received some DLC a few weeks ago, entitled “Treasures of the Sun.” We recently got our hands on a review code for it, and for those of you who are interested, we have some impressions to share.

“Treasures of the Sun” is primarily a content patch for DS3 players. For those of us who have beaten the game, the DLC prompts us to load a designated save point (called last save, or something of the sort) in order to access the new content. This save point is just before the last area of the game, so any items you may have picked up there won’t be available to you for the DLC. The DLC is also accessible earlier in the game, so players who haven’t beaten the game can also look forward to some desert-trekking and sandmonster-slaying.

The story for “Treasures of the Sun” is along the same lines as much of the original campaign’s story (which is to say, pretty bare bones). Your character is on a mission to find a lost Legion member, which leads you to go through a portal in the Causeway to a new desert land. As you follow the breadcrumbs of this main quest, you also have the option of doing a good number of side quests as well (mostly involved with helping the locals).

Now, let’s get to the “good stuff,” as far as a dungeon-crawler player is concerned. The level cap is increased to 35, which allows players to invest more points in their abilities and passive skills. Also, if you’re regretting any of your ability or skill point choices, “Treasures” also introduces a respec system where you can reallocate these points. This is for a fee, of course (I believe it’s something like 20,000 gold). A mild enchanting system is also added into the mix where gems can be found as drops or from breaking down equipment. These gems can then be added to equipment. While there is no limit to how many gems you can add to a given piece of gear, each piece of equipment can only have a total of 6 attributes, and gems cannot be removed. Perhaps the most interesting mechanic “Treasures” adds is ultimate abilities. After doing one of the earliest quests in the DLC, players have access to these powerful abilities. You can choose between three different ultimates: AoE damage, temporary invulnerability, or a heavy heal. The strength (or duration) of these abilities is contingent on how many power orbs you have built up when you use them. So, for example, an ultimate used when the player has 4 power orbs is much stronger than if they just have 2. These abilities are extremely useful in boss fights or if you get yourself in a tricky position. The only hitch I found with them is that it appears the party leader must choose the ultimate that all party members use. So players will have to agree which ultimate they’d all like - no mixing and matching between party members, unfortunately.

I found the DLC to be challenging - but in a good way. It had been a few months since I’d last played, so it took several frustrating reloads before I got back into the swing of things. Once that little hitch had been taken care of, though, things went much smoother. The amount of XP you get from killing the monsters in the new area is pretty substantial, and I was leveling up pretty quickly (I started the DLC at level 28 and finished at level 32 or 33). There’s a satisfying number of tricky bosses and mini-bosses as well as some nice loot opportunities (my partner got about 4 new orange pieces of gear for Lucas and I got a new orange rifle for Katarina). Also, the gamerscore points are practically thrown at you, for those of you who enjoy getting DLC for the gamerscore.

There’s a solid 2.5 hours of content in “Treasures” (not counting reloads), which isn’t bad for $10. It took me about 12 hours to complete the main campaign, so an additional 2.5 hours of challenging content for $10 doesn’t seem too bad to me (in addition to the added features I discussed). The DLC, of course, doesn’t reinvent the wheel, so if you didn’t enjoy DS3, I can assure you that you won’t like its DLC. But for those of you who are looking for some new content and features for DS3, “Treasures of the Sun” is just up your alley.