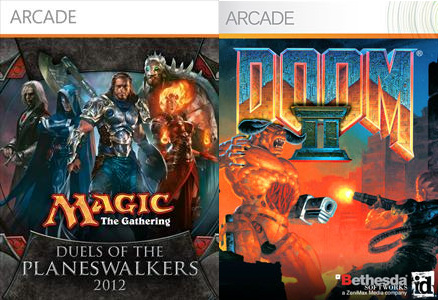 Last week’s massive Xbox Live Arcade game sale was probably the best ever from a co-op standpoint, with over 10 co-op games on sale for at least 50% off. This week XBLA sales aren’t overflowing with cooperative multiplayer titles, but they still include a few good ones: namely Magic: The Gathering – Duels of the Planeswalkers 2012 and Doom II.

Bethesda sale (open to all members):

Xbox Live Deal of the Week (Gold members only):

Magic 2012’s sale price is quite a deal as that game just came out over the summer. It’s also a significant improvement over its predecessor, with lots of new modes and limited deck-editing ability. I recommend it to all strategy fans – even those who haven’t played Magic before – as the tutorial and interface make learning the game a snap.

As for Doom II and Quake Arena Arcade going on sale – what better way to celebrate/prepare for RAGE than by checking out two of id Software’s biggest classics? The full Doom II campaign is playable in online co-op, though sadly its Achievements are limited to single-player or versus multiplayer. Quake Arena Arcade is a single-player and online versus only affair, but Quake is an enthusiastically fast and fun FPS experience.