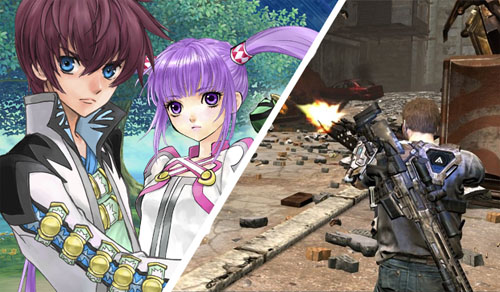 Tuesday morning I took the train down to the Loews Regency Hotel on Park Avenue to check out Namco Bandai’s roster of upcoming games. The appointment granted me access to go hands-on with ten or so games, but only two had co-op: Inversion and Tales of Graces F. That was completely fine by me, as I spent my entire hour or so there playing those two and talking to the reps about them.

Now, we’ve done a few hands-on previews with Inversion before, but I believe yesterday was the first time any of us actually played the campaign in co-op. I’ll keep the talk about mechanics and what-not to a minimum, as we’ve already covered those before. For yesterday’s demo, I played main protagonist Davis Russel while my rep co-op buddy played Leo Delgado. The part we played through was only a couple hours into the game, so while we had our Grav-links and some of the basic Low-Gravity skills (tossing people up in the air, grabbing stuff floating in the air, etc.), some of the more advanced skills were not yet available to us yet. After getting attuned to the controls, we jumped right into the action. The cover, run, and gun set-up felt very familiar, and flowed well. My partner tossed several guys up in the air with her Grav-link soon after we engaged while I concentrated on mowing them down with my assault rifle. She noted that when playing co-op, it usually works best when one player calls out when they’re using their gravity abilities so as to not accidentally double-up on trying to throw the same guy, for example. Since the Grav-link has a limited ammo-like system, players won’t want to waste it.

We navigated a couple of small rooms with relative ease, taking out several guys and then stepping on pads which would shift us to another plane of gravity. After watching a short cut scene, we were placed into a chaotic warzone. Our goal was to fire rocket launchers at a turret. Each rocket launcher only had one shot to it, and it took 3 or 4 good shots to take the turret out. These launchers were scattered across the area - an area swarming with enemies focusing on making us dead. My partner took cover to the left and began shooting at some of them to draw their fire. Meanwhile, on the right, I lined up a shot at the turret. After firing off that shot, the enemies began to focus on me, which allowed my partner to get her shot off at the turret. I ran into some trouble when I ran out of ammo. Down to only grenades, I began to panic as my screen turned black-and-white from taking too much fire. I shot one of the guys shooting at me with my Grav-link, sending him spinning up in the air. With not much else to do, I threw my grenade at him. It hit him mid-air and exploded, taking care of that problem. Cooool. Seeing that I was out of ammo, my partner shot a bolt from her Grav-link, throwing some rubble and a gun up in the air. I grabbed the gun out of the air with my magical gravity powers, and could now shoot enemies again. I was told that this was a pretty useful trick for co-op, since grabbing items out of the air which are already floating costs no Grav-link ammo. So if your partner needs some ammo, or is pinned behind a rock and needs some additional cover to move out, strategic use of your Grav-link can save the day. It certainly saved mine.

After taking out the turret, we were treated to a short cut scene of a boss figure descending down upon us, and then demo ended. I certainly had a good time with the short amount I played, and the co-op definitely feels solid. We’re sure to get some more information about this before its release in February. Right now, I’m looking forward to it. Inversion will be out February 7th, 2012 with 2-player online or local co-op on the PS3 and 360.

I don’t know about you guys, but I’m a big Tales series fan. I like JRPGs, I like local co-op, and Tales is one of the few places where you can consistently find this pairing. Going into the demo of Tales of Graces F, I was already pretty excited. I’d been following this game for about two years (since it came out on the Wii in Japan), rabidly waiting for its Western release. The game certainly did not disappoint, and now I’m even more anxious to get ahold of it and start Demon Fang’ing and First Aid’ing it up.

Tales of Graces F is an enhanced PS3 port of the original Tales of Graces on the Wii (the “F” I believe stands for “Future”). It has all the content of the Wii version as well as some additional features (including an extra 15-hour playable epilogue which is unlocked after beating the game). My time with the game mostly consisted of playing some battles, surfing the menus, and chatting with the rep about what this new Tales game brings to the table. The most basic structure of Tales of Graces F is as one would expect from any Tales game: it has up to 4-player local drop-in/drop-out co-op, where player 1 controls the movement around the map and all players participate in the real-time combat. Since combat is essentially where the co-op is, let’s talk about the combat features. One of the very cool things that Graces adds, which I’ve never seen in a Tales game before, is the ability to swap between any of the current party members during combat with a simple touch of the D-pad. Maybe you want to play one of the ranged characters for a certain boss battle instead of your normal melee character. Go for it; just hit the D-pad and select that character.

One of the features which has been common in some of the latest Tales game is the ability to free-run on the battlefield. Graces doesn’t have quite the same movement mechanic in battle. While at first I was distressed to hear this, the rep assured me that the system implemented in Graces still allows you to easily navigate the battlefield. Tilting the analog stick up will always run you towards your target, but if you want to get to an enemy behind another enemy, you can dodge through him. You can also backstep or dodge left or right to evade enemy attacks (in fact, you’ll get bonuses for this, which I’ll get to latter). So, it’s not like we’re back in some of the earlier Tales games where we’re stuck on a 2D plane with no good way to navigate the battlefield besides forward and backward. Another slight departure from the norm is the fact that Graces does not have a TP (mana) system. Instead, it has a CC system, which is a combat point system. Both your spells and normal attacks take CC. To reflect this, both are called Artes (a name previously reserved for spell-like abilities). Your alpha Artes are normal attack combos which form chains. At each step in the chain, provided you have enough CC, you often have a choice about which attack to perform next by hitting your attack button and a direction to pull it off (e.g. X + up may be a jump attack while X + forward might be a ground attack or something). Your beta Artes are the familiar artes from your other Tales games (e.g. Demon Fang, First Aid, Stalagmite, etc.). They also cost a set amount of CC. Each character has a CC range (9-12, for example), where the first number represents how much CC they start the battle with and the second number represents the max number of CC they can have. CC is depleted by using Artes. It can be gained several ways, such as building up attack chains with your team, or evading attacks, etc. As someone who has a love/hate relationship with mana-based systems in RPGs, the CC system sounds like a really awesome idea.

There were many other small, but exciting, changes that the rep and I discussed (much to my delight, he was as excited about the game as me). For example, titles actually do stuff in Graces (you level up multiple titles per character and they can increase things like stats or the effectiveness of specific Artes). If you let me go on about these little details, though, I could probably fill up a novella, and I need to stop somewhere.

Tales of Graces F doesn’t currently have a release date, but the rep told me that they’ll be announcing it in the next two weeks or so. It’ll be coming out on the PS3 with 4-player local co-op.