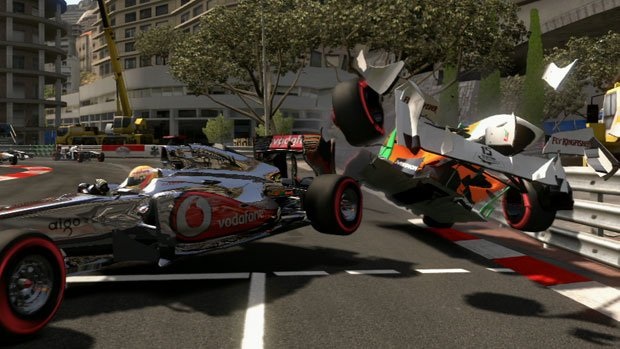 Some of you may have been wondering where Co-Optimus' co-op review is for the now 3 week old F1 2011. Due to some game breaking issues in the co-op championship mode, the game is borderline unplayable with a pal. After the first game patch failed to solve the problems, Co-Optimus put on its investigation hat, exploration trousers and inquisitive undies to find out what was going on with the game and if a fix is being released.

For many the co-op championship mode was going to be the biggest new feature to this year's F1 game, allowing 2 players to play a full championship online from Race Day A to Race Day Z. However, as the official F1 2011 forums can attest, this is easier said than done.  There are numerous bugs within the co-op mode that can ruin the experience:

1. A great feature of the co-op championship is that you can save your progress and return as a duo at a later date. However, once you reload your save it will always set the AI to the lowest level, no matter what difficulty you are playing. This means you could set the game at a 'professional' level, but the AI acts like it is a beginner.  This bug sometimes appears intermittently between qualifying and race days.

3. You can ruin your tyres in qualifying, only to start the race on new tyres. A small issue, but on a game that can be set up as simulation style racing, this will annoy the hard-core players.

A combination of these three bugs means that you never know where you will finish, what tyres you will get and how good the AI is. The issues spans all three versions of the game, but the PS3 players have been most vocal. This may be because they did not have Gears of War 3 to distract them on the same release day.

Co-Optimus gave Codemasters some leeway to find a fix and Patch 1 has already been released. However, this patch fixed some tearing issues and did not fix the co-op problems. Having contacted Codemasters about when the co-op would actually work, they replied:

It's one of numerous issues the team are looking into for the 2nd patch.

I then asked when the second patch was coming. I have yet to receive a reply. Therefore, for the foreseeable future Codemasters will continue to charge (for used owners anyway) for the VIP pass, or the equivalent of $8, for a co-op mode that does not work.

A review of the current build of F1 2011 will follow later in the week. Here is a hint - good single player, shame the co-op is broken!