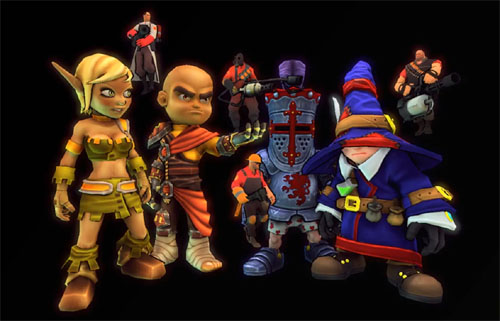 Dungeon Defenders is coming out next Wednesday. No really - after a ton of delays (which sound like they may have been worth it, due to the crazy amount of features the game will now have), it'll finally be coming to your PC, 360, or PS3, depending on your preference. In what is perhaps an effort to sway more PC sales, Steam is offering some Valve-oriented pre-order incentives for your pre-ordering delight. A Steam pre-order will grant any of your characters access to four Team Fortress 2 familiars/pets, and your Huntress class access to a portal gun. Don't believe me? Check out the video and details - the proof is in the pudding!

The Aperture Science Handheld Portal Device for the Huntress hero class. Constantly consuming energy when active, this device allows it’s user to open portals from one location to another and can be used to greatly extend a trap’s range, quickly teleport across the map, or confound enemies!

Dungeon Defenders will be out October 19th on PS3, 360, and PC with 4-player co-op. And I must say, I'm looking forward to this one. Not only for the mixed tower defense/RPG experience, but the game will always have a bit of a nostalgia factor for me as it was my very first news story with Co-optimus over a year and a half ago!