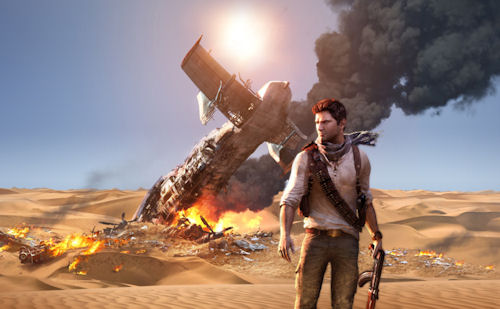 Naughty Dog has announced that Uncharted 3: Drake's Deception has gone gold and will be available to retailers on November 1st.  The PlayStation 3 exclusive game is one we've been watching for a while, along side one of the most entertaining single player experiences in video games this generation - Uncharted 3 will offer a variety of multiplayer modes including several cooperative modes for three players.

But that won't be the only co-op goodness inside the box, as Sony has revealed new purchases of Uncharted 3 will include a code for the Starhawk Beta which will take place in early 2012.  It hasn't been announced yet what is going to be included in that beta, but we hope it's the co-op mode.

We asked Naughty Dog to see if this is affected at all by the recent Online Pass announcement, and according to them, LAN and Local play in all game modes are unaffected by online pass.  There are two menu items - "Online Play" and "Play Locally" - the latter of which encompasses LAN and Split-Screen.  So anything under the Online Play menu will require the code gated online pass, while the other will not.