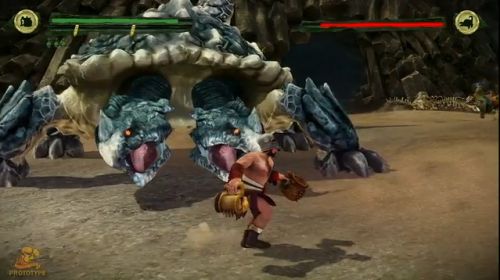 Over the weekend we reported on Double Fine's Amnesia Fortnight Humble Bundle. The developer invited the public to take part in their two week prototyping process, allowing anyone to vote on games pitched by their talented team. Contributors will be able to download the top five games, as well as two prototype games from previous Amnesia Fortnights. The reward for contributing more than the average dollar amount (about $7.30)  is a prototype game called Brazen. This cooperative action title is the brain child of Brad Muir, who was the lead on Iron Brigade.

I love the concept behind Brazen. Four players choose from three character classes, a shield-bearing Stalwart, a ranged based Waracle, and a mighty Beerzerker and then face off against giant, primordial, monsters. In the following video, Muir discusses his inspiration for the cooperative brawler as we see the characters battle a large polycephalic turtle. I also think I spotted some concept art for a flying griffin-like creature with the head of a hammerhead shark. Fantastic.

When people start throwing around words like "Monster Hunter" and "Ray Harryhausen," they have my attention. I downloaded Brazen and took it for a solo spin. Unfortunately, it didn't run very well on my laptop. I did enjoy tossing a few back as the Beerzerker. Then the overgrown turtle killed me. Brazen is still in the early stages of development, so I understand playing through a few hiccups. I got the general idea: It's pretty damn cool. I can't wait to see what they do with it.