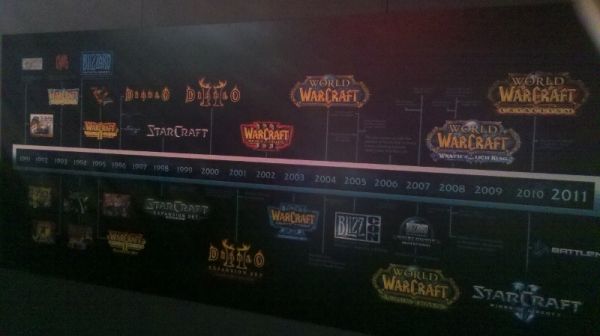 Full disclosure: I am not a Blizzard fanboy.  There, I said it.  Wait, don't freak out!  I'm not a Blizzard hater, either.  I've played through Diablo and some of the sequel.  I dabbled in WarCraft before there was a "World of."  I Zerg rushed with the worst of them in StarCraft.  I did all of that and more - a decade ago.  I have never owned a gaming PC, ever.  I mooched accessed Blizzard titles through a steady stream of college friends and roommates back in the late 90's and early 00's.  Once I moved on I never looked back.  Somehow, I found myself at Blizzcon 2011 last Friday.  There were sights, there were sounds, there were many announcements, and not so much as a whisper of StarCraft: Ghost.

Pretty much all the news from Blizzcon 2011 was announced during the initial address from the main stage.  Here's the stuff that matters:

Diablo 3 free to World of WarCraft annual subscribers - How cool is this?  If you commit to a year of World of WarCraft via an annual pass, you get a digital copy of Diablo 3 for free.  Last time I checked, WoW fees were about 15 bucks a month and something like 11 million people were willing to pay it.  That's a lot of free Diablo 3's.

No release date for Diablo 3 - This pissed some people off.  The irritation was audible when Blizzard's Chris Metzen simply stated that it would be done when it's done.  I'm pretty sure it will be out eventually.   I don't know what's taking them so long.  I played the demo while I was there.  It's the same damn game from 1996, except it looks better.  I don't know... I can violently click a mouse as well as the next guy.  Trust me, they'll let you know when it's done.  They're not doing this to tease you.  They want your money. Diablo 3 Collector's Edition announced and detailed - Like any good self respecting retail game, Diablo 3 is going to have a collector's edition.  It will include the game (naturally), soundtrack, an art book, a behind the scenes DVD, and a Soul Stone USB drive that can be affixed to a Diablo skull.  As an added bonus, the full version of Diablo 2 as well as the Diablo 2: Lord of Destruction expansion will be included on the USB! Technology is AMAZING!   There will also be some in-game goodies for each of Blizzard's big three franchises, including Aesthetic Artifacts for you Diablo 3 character, a pet for WoW, and StarCraft 2 Battle.net portraits.

There's been no official word from Blizzard on the price, but Amazon has the CE listed at $99.99.  If you are going to pick up the almighty Diablo 3 Collector's Edition use this link and help support Co-Optimus!  If you're still on the fence about Diablo 3, check out this cinematic.  It's pretty.

World of WarCraft gets new furry expansion - I did not see this coming.  I'm sure you've already heard, but WoW's expansion "Mists of Pandaria" looks a lot like Kung Fu Panda.  It just does.  The crowd must not have noticed, because they went absolutely crazy   There's a host of new changes coming to WoW, and I will not pretend to be an expert on them here, so allow me to distract you with this picture of a panda:

Okay, so it looks like a tough panda, but still, it's a panda.  They get scared when their own young sneeze at them.  I did have the pleasure of teaching myself how to play WoW in front of some Blizzard staff members as well as a few game journalists.  I got a pretty amusing look when I leaned over to the person next to me and asked "How do you move?"  Then I killed some blue foxes with Kung Fu.  Huzzah?

Trailers!  There wasn't much more in the way of news, other than a pair of trailers for Blizzard DOTA, (whatever that is) and the new StarCraft 2 expansion, "Heart of the Swarm."  Here they are in all of their brief, purposefully vague, glory!

Well, that about wraps it up.  Overall, Blizzcon 2011 was plenty of fun.  The games look good.  The artwork and statues were awesome, be sure to check them out in the gallery.  Now if you excuse me, I'm going to go back to console gaming, right after finish banging these two rocks together in an effort to make fire.