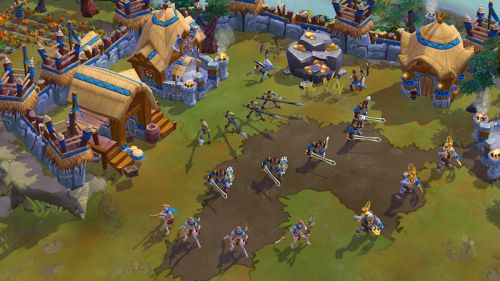 Gas Powered Games and Microsoft are working hard to keep their freemium strategy title Age of Empires Online from being lost to the ages. First off, the long-promised Spring Update is now live and brings metric tons of changes and improvements. Second, the new Premium Celtic Civilization has launched at a sale price of only 400 MSP or $4.99. And if that wasn't enough, all of the main Age of Empires Online premium content has appeared on Steam at extra-low prices as well.

The first major addition in the Spring Update is of course the addition of the Premium Celtic Civilization (pictured above):

Take charge with the Celtic infantry! Spirited Celtic warriors paint themselves before battle and arm themselves with metalworking and crafting skills. Command the fleet-footed Woad Raiders and the high-health Champions, and revitalize your siege-less warriors using healing units: the fierce-fighting Druids and the buff-casting Augurs. Unlock Rare and Epic gear, Advisors, and Ranked PvP; increase your Capital City warehouse storage; and add more Workshops.

Create your own battle! The fully configurable Skirmish Booster allows you to choose every element of gameplay, from resources, teams, and victory conditions to opponent civilizations, difficulty, and strategy.

Yeah, this one is way, way overdue. You can now enter into Sparta PvP with a friend as a Party and match against other teams. This works in both Standard and Champion mode, and free players can play Champion PvP if they're in a party with a Premium player--even writing out leaderboard entries.

You can now do a simple search for other players looking for a Party in your level range. This feature is accessed via the "Party Invite" button in the capital city UI. There's a new button, "Find" that starts a search for other players in your level range who are also interested in forming a Party. Once it finds another player also looking for a Party, it automatically sends an invite and, if accepted, you're in a Party.The current implementation uses player level for matching up party members, starting with the same level and extending outward up to five levels. You can exist the Friends List UI, and the search will continue running in the background while you're doing other things in your city or in a region; it will also continue searching even when you switch regions. To stop searching, right-click the animated icon that appears next to the Party Invite button.This is an initial implementation of this feature. If players find it useful, it can be extended to allow specific searches, like "Find PvP Party," "Find Arena Party," "Find Co-op Party," "Find Skirmish Party," etc.

When viewing the stats for Gear, you can now see via icons whether the item represents an upgrade for any of your current units which can equip the item, a downgrade, or is pretty much the same. A green up arrow (or arrows) in the hover tips means it's an improvement, while a red down arrow (or arrows) mean it's worse; a tan circle means it's equivalent. This is a fairly blunt calculation that it uses item level and rarity and is intended to be a quick way to compare item effectiveness, but is not a definitive comparison. Some stats cannot always be compared directly, such as Movement Speed, Cost, or Build Time, and it doesn't consider stats or what's better or worse for the current unit or units, or the play style of the player or the civilization.

The remaining major game changes and bug fixes are too numerous for us to list, but you can find them all here.

Age of Empires Online is a Games for Windows Live title, meaning it requires Microsoft's GFWL software to play. Up until now, the only way to purchase content packs for the game (besides the single retail pack on offer)  was through said software and Xbox.com. That's just changed with the game launching on Steam, a much more popular place to pick up PC games. Steam is even running a couple of specials on content packs: you can get all of the non-vanity packs in a single bundle for $16.99 (a tremendous savings), or grab the Defense of Crete and Celtic Civlization Bundle for $4.99 ($10 off).

Concerned about compatibility between previously purchased content and the packs on Steam? Not to worry, the developers have spoken:

AOEO remains free to play. Players who join us from Steam will have the option of using their Steam Wallet to purchase our content, such as Civilizations and Boosters, just as LIVE players use Microsoft Points.
When playing the game itself, there is no difference between Steam players and LIVE players; no matter which version of the game you have installed, LIVE or Steam, you will be able to play with anyone on AOEO, and there are no game differences at all. However, one unfortunate side effect of the game being available on both services is the Steam Store and LIVE Store are not compatible with each other.
There are a few possible scenarios:
If you are a LIVE customer you will only be able to make purchases on Steam after Uninstalling AOEO first, and then Reinstalling from Steam.
If you are a Steam Customer, you will only be able to make purchases through the Steam Wallet. Keep in mind this means that Steam customers will not be able to use Microsoft Points to purchase any content from LIVE.
If you do decide to reinstall, you will NOT lose any progress or items; all that data will still be stored on our servers and be waiting for you after the reinstall is complete. The in-game stores will point to the appropriate store. A few additional notes: If you currently have AOEO installed and you want to switch to the Steam platform.
Update and uninstall your current game then reinstall via steam. This will ensure the most efficient uninstall process and make reinstalling from Steam much smoother.
The Steam version WILL include the GFWL platform (i.e. you still sign in with a gamertag etc).

Age of Empires Online supports 2 player online co-op. Check out our co-op review for full details, and then stop by Xbox.com or Steam to download the game.