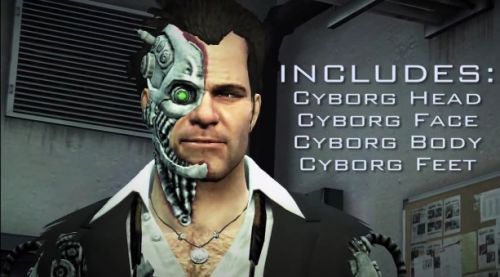 Nice face, Frank.  If you're sick of looking at Frank West's ugly mug and want to get your Tetsuo: Iron Man on, you're in luck.  The Cyborg Skills Pack DLC was announced last week and is available NOW.  It gives you a sleek T-800 look and some nice electric effects like that lightning guy had in Big Trouble in Little China.   By the way, Frank is definitely probing a zombie at the end of the video.  Awesome?

Dead Rising 2: Off the Record is out now on the Xbox 360, PS3, and PC.  It supports two player online co-op.  The Cyborg Skills pack costs $2 bucks.  Zap some zombies today!