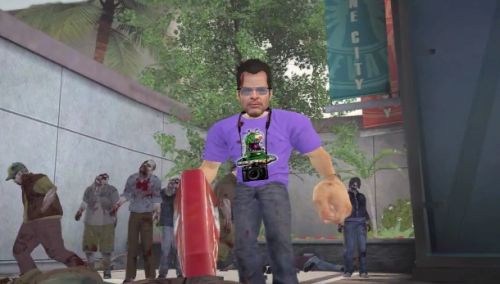 Oh Capcom, why do you do this to us?  How much DLC can you put into the spin-off of a sequel?  Dead Rising 2: Off the Record came out less than a month ago, and it's already received a few downloadable outfits for our favorite zombie fighting photojournalist, Frank West.  These aren't just cosmetic accessories, each one includes some special abilities that improve upon Frank's already impressive survival skills.  They also cost two bucks apiece.

First it was the Cyborg gear, then the BBQ Chef costume, and now we have a Fireman's suit.  But that's not all.  There's also a new DLC called the Gamebreaker pack.  It has several modifiers like "Big Head Mode," "God Mode," and "Infinite Weapon Durability."  We've all seen cheats like these in games before, right?  Did we ever pay $5 bucks for them?  We will now!  At least, that's what Capcom's banking on.  The Gamebreaker pack will cost players a whopping 400 MSP, or five American dollars.  The Fireman's outfit will cost you 160 MSP or $2.  Check out the videos, and let us know if you think they're worth it.  They should be available for download now.