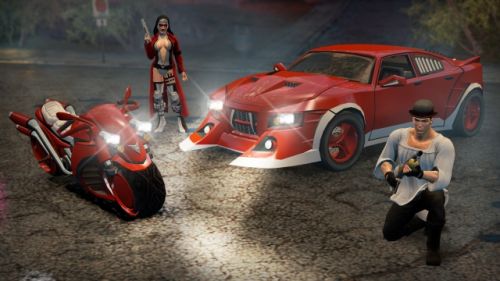 THQ has already announced that Saints Row: The Third will have "about 40 weeks worth of downloadable digital content after the launch."  This is great news for any up-and-coming Third Street gangster.  The bad news is that you'll have to pay for it.  This is the company that blocked system link with an online pass, which is not to be confused with the recently announced Saints Row Season Pass.  The Season Pass will net you the first four DLCs for about 15% off.

The new content will include three mission packs, as well as one accessory pack.  With the season pass you can get all four of these DLCs for $19.99, or 1600 MSP.  We can assume that our hard earned money is going to help with the production of Saints Row Four, which has already been confirmed by THQ's Danny Bilson in an interview with X-Play.  We're concerned that some of this "new" content was already shown off in trailers for the retail game, despite being DLC.  We asked THQ about this, and were told  that "the trailer is not an appropriate representation of the DLC," and that "the DLC is still very much in development."  You can see all of the details after the break.

Saints Row: The Third will be out on November 15th for the Xbox 360, PlayStation 3, and PC.  It supports two player online co-op.  You can expect our full Co-Op Review early next week.

The Wide World of Genki takes over Steelport for a sporting tradition totally and utterly unlike any other.

Gangstas in Space (Scheduled to be available Winter 2012)

The Saints go intergalactic in this science-fiction misadventure.

The Trouble With Clones (Scheduled to be available Spring 2012)

Copy-cat killing at its finest.