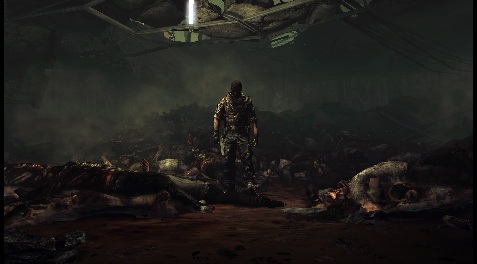 If Spec Ops: The Line was a person, it would be a soldier stuck in enemy territory.  We had hands on time with the game in 2010, but since then it has been held back until 2013.  Like any good soldier, it refused to quit and worked its way home to us (I made some pie).  Now 2K Games are promising more information in the coming weeks.  Up first is a brand spanking new image and the promise of a trailer next week.

The upcoming trailer will be available from 2K's YouTube page from next Tuesday.  2K also plans to release a series of editorial coverage and articles via their Twitter account @2Kgames.  Today's screenshot is of Spec Ops: The Line's main character, Captain Walker.  He appears to be moodily standing on his own in a dark room - he's such a teaser!

The next few weeks should bring more information about the co-op aspects of Spec Ops: The Line, which are still unknown.  Until then, you can wait for more info by watching the straight to DVD Behind Enemy Line II: Axis of Evil or reading Bravo Two Zero.