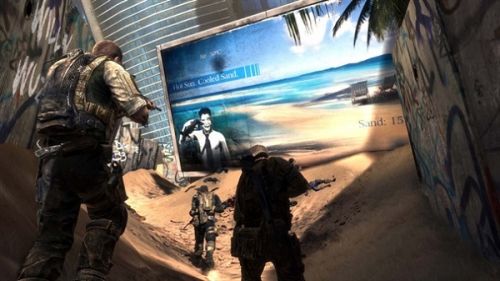 Spec-Ops: The Line is out now on the 360, PS3 and PC - but it's still missing a piece that Co-Optimus readers would be most interested in - namely the co-op mode.  At E3 2012 we went hands on with it and were quite impressed with what was on display - a gritty, difficult, and tight co-op experience for two players to work through.  We were told the content would be available shortly after launch and today 2K Games have put that time frame into perspective.

Players must work together to fight through waves of enemies and blinding sandstorms to complete their objectives, emphasizing teamwork and utilizing a variety of weapons and explosives.

The release window is set for "August" - but 2K stressed the developer is taking their time to make sure it's on par with the other content.  When the content IS released it will be free and feature four missions to work through with another player online.

I've been playing the single player campaign for a week now and I'm honestly shocked at how good it is.  Combat feels impactful and controls extremely well.  Add in the dynamic sand which changes the landscape on the fly and can be used as a weapon at times, and you'll be kept on your toes.  The level design is incredibly unique, often turning you around to the point where you aren't exactly sure which way is up.  Suddenly you'll come through some broken windows and realize you are 50 stories above the city of Dubai.

Probably the most surprising feature of the game so far is the story and emotion conveyed.  While most war based video games latey feel very Hollywood, Spec-Ops: The Line draws you into it making it more than a simple action movie.