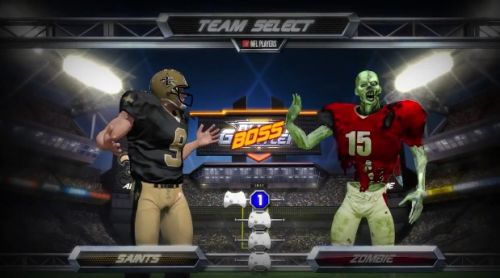 The NFL Blitz franchise has been resurrected by EA Sports.  A video promoting the revamped series was posted on Youtube last month (see below).  The title will feature all of the crazy gameplay the series was known for, including flaming players, wrestling-style tackles, as well as teams made up of zombies and robots.  Best of all, it won't break your wallet.  The game will feature all 32 NFL teams in a nice $15 dollar (or 1200 MSP) downloadable package.

NFL Blitz will also feature two player local and online co-op.  You'll be able to team up for some good old fashioned comp-stomping action.  EA Sports designer Yuri Bialoskursky walks us through all the co-op features in the second video.  We're still a little unsure as to whether or not you can play with four players on the same team, but Blitz definitely appears to have 2v2 and 2vAI action.  We'll be sure to keep you posted on all the co-op information. NFL Blitz is expected to hit the PSN and XBLA this January.

Zombie versus Sasquatch? I'm down.