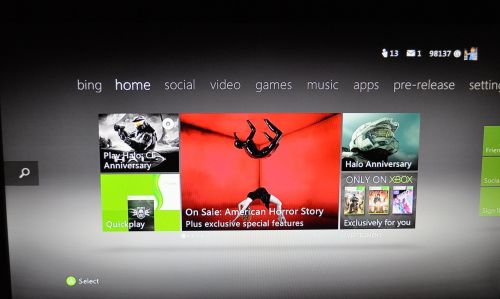 "Let me sell you something."  That's the only phrase I can think of when I see the new Xbox 360 Dashboard, which is out now on your console via a free update.  The updated dashboard replaces the "New Xbox Experience" design which came out almost 3 years ago.  The latest iteration puts the dashboard in line with a new design philosophy at Microsoft brought on by Windows Phone 7 called "Metro" - square tiles that bubble up information to the user in a simple and clean design.  There's one problem with the implementation on the Xbox 360 though - it's anything but clean.

Booting up the new dashboard takes you to a home screen, a screen that contains 4 small tiles and one large tile in the center.  What can you do from this screen?  You could choose from 3 ads (1 big box which actually rotates through 5 ads and 2 small) or choose to play the game in your drive or a list of games from a Quick play menu.  It becomes immediately apparent the focus of this dashboard is ads to sell you something.

Your next tab over is your social tab, and this one is the only one devoid of any advertising.  Instead you'll get a quick glimpse at some of your friends and parties online playing joinable games and beacons.  You can also jump into your full friends list or launch Video Kinect, Facebook or Twitter.  Finally you can jump into your profile to view achievements, customize your avatar or change your theme. After your social tab it's onto video - here you are greeted with seven tiles - five of which are advertisements.  The rest are for Zune Video and Xbox 360 videos downloaded from marketplace.  Oddly Netflix and other video content providers aren't located here.

Finally a few tabs over from home we have the games tab.   Again, here we have five tiles to look at, 3 of which are ads with one large block rotating between 5 ads.  The other 2 smaller tiles take you to your games section and the marketplace.  The game's section has been revamped with a list of previously played 15 games and a quick jump to different categories like Demos, Arcade, Indie and Kinect.  It's a much more efficient way of finding your games than before - and you no longer have to wait 30 seconds for some long list to populate.

Next we're onto your apps tab.  You'll also be able to jump into Netflix, Hulu, or other video apps like HBO Go or Comcast here -though most haven't launched yet - and won't until next year.  Finally there's settings to play with as well.

Ok, so that's your standard stuff, but there's actually some really awesome and powerful stuff under the hood here, but you just have to look past all the ads to get it.  There's a new search option powered by BING which can be controlled with the Kinect using Voice or via text input.  It'll search all content both on your console and online through the video marketplace, Zune music and others.  It's a great way to find content that's buried on your Xbox. My personal favorite new addition, and the one most notable for co-op gamers, is Beacons.  Beacons are basically sticky notes for your friends telling them you want to play something.  Perhaps you are trying to get five folks together for Voltron.  You can simply set a Beacon saying - "We need a green and yellow lion for co-op."  The next time a friend fires up Voltron they'll get a notification telling them tha you want to play Voltron, press the guide button to see the message, and soon you can be playing.  You don't necessarily have to be IN the game - even to view beacons, you can see them on the dashboard themselves by looking at your friends.  There's other notifications too that alert you when a friend starts to play a game that you are already playing.  You can even have the Xbox post a Twitter or Facebook message along with your beacon to get a game going.

Some other great features are the ability to have your profile on multiple consoles, tying your sign in to your Windows Live account.  This means you no longer need to bring a USB stick between consoles to sign in, though you can still use this method to bring yourself to a friends house.  Cloud storage is also a new addition which gives you 512MB of storage space for saved games so you can access them from anywhere you sign in.

On top of all this the entire dash is now able to be navigated using your Kinect using both gestures or voice methods.  Personally I prefer the voice stuff, it feels all very futuristic.  Just about any function on the dashboard works using this and in our testing it was accurate almost all of the time.

All in all the new Metro Dashboard for the Xbox 360 is a slick interface that is simply marred by way too many ads.  If you can get past all of the in your face type stuff, there's a really good feature set here for you to enjoy.  I'll be curious to see how the user feedback is on this and if Microsoft will make any adjustments to what's available - it'd be great if we could customize some of the tiles to put stuff we frequently use on it.

Here's a video tour of some of the new features like Beacons, Kinect Search and more.