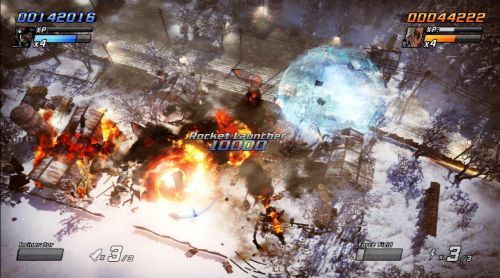 So you've managed to get through Renegade Ops on the hardest difficulty, but you're hungry for more?  We've got you covered.  Tomorrow, on December 20th, two new DLC packs will be available for the PlayStation Network, Xbox LIVE Arcade, and PC.  These new pieces of content offer a new three-stage campaign as well as two new vehicles.

Renegade Ops had one of the best/worst endings I've seen in a game this year, so I'm a little curious to see what they do next.  The "Coldstrike Campaign" introduces a new bad guy, named... (wait for it) Coldstrike!  The original RO enemy was called Inferno.  I see what they're doing here.  Three new ice-themed levels will challenge players with new enemies and hazards.  You can pick it up for $4.99 or 400 MSP.

The "Vehicle Pack" adds two new vehicles/characters to the Renegade roster.  Crystal drives an "armored vehicle" which can generate a force field.  The second character commands an "off road racer" and is named Blazemo, which is either really awesome or really lame, I haven't decided yet.  He has a special weapon called the Incinerator, which, you guessed it, incinerates.  This pack will cost you $2.99 or 240 MSP.

Renegade Ops is a very good, very pretty twin stick shooter.  We gave it a 4.5 out of 5 in our Co-Op Review.   If you enjoyed your time with the title, these two pieces of DLC should be welcome additions.