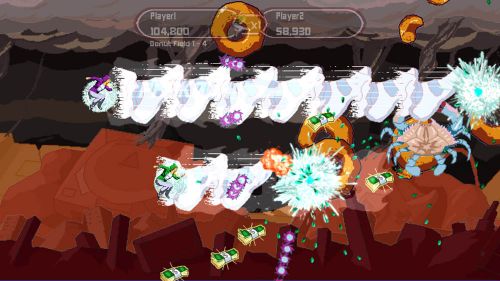 Nathan Fouts of Mommy's Best Games, makers of Explosionade and Shoot 1UP,  is a bit disgruntled with Microsoft.  Why you ask?  The new dashboard has way too many ads.  We concur.  But that's not what really makes Nathan mad, no, it's the fact it's almost impossible to find Xbox Live Indie games buried on the marketplace.  So what did he do?  He turned it into a game...within a game.  Enter Game Type.

Game Type is two games.  The first part is actually finding the menu to play Game Type.  You're presented with a mock dashboard and given the task of locating the menu buried beneath.  The actual launching point for it is the real location of the Xbox Live Indie channel, though the content of the mock dashboard is filled with some pretty entertaining ads.  Five year old PlayStation 3 meme?  Yeah - he went there.

Once you get into the game you play as Parkour Girl, a reference to the idiotic graphic chosen for the "Game Type" block on the dashboard - your avenue for finding the Xbox Live Indie games.  Parkour Girl can shoot and parkour kick the crap out of enemies in a side scrolling shooter.  Who do you fight?  Well none other than members of those annoying ads like donuts, football players and crabs.  At any time a second player can join in as a pink parkour girl and take on the action. There doesn't seem to be an "end" to the game, you merely loop around and it gets harder and harder.  On the plus side - it does support online leader boards.

As someone who is working on an Xbox Live Indie game himself right now, I hope Microsoft corrects the wrong here and makes this a little bit more obvious.  The state of the current dashboard is an ad ridden mess and it needs to be fixed pronto.  If Microsoft doesn't get the hint after something like this, it might be time for a sequel.