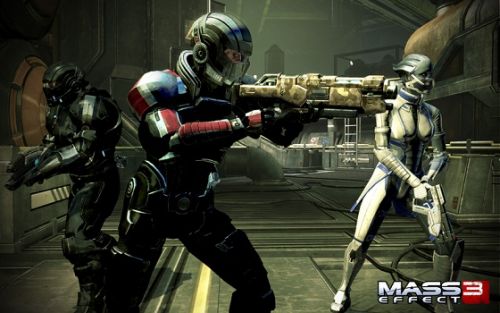 Pre-order incentives are the bane of my life; which shop should I purchase my game from if I want the special pink t-shirt?   Most of the time I don't care what I get, just give me the game.  However, a souped-up assault rifle and some power armor may just interest me.  A new video highlighting these extras, plus some new screens, have been released from the Bioware Mass Effect 3 vault 'o' bits.

Currently the extras seen in the below video are available exclusively from Gamestop US, but it is likely that other stores will be providing extras and that the rest of the world will get their hands on the N7 Defendor Armor, N7 Valkyrie Assault Rifle and M55 Argus Assault Rifle.  All of them will be slightly better than the equipment the rest of us plebs will be having to use on the game's launch.

There are no details whether any of the added bonuses will appear in co-op, but to quell any anger about this news, gaze instead upon the new set of screens and imagine taking on the Geth in 4 player online co-op.