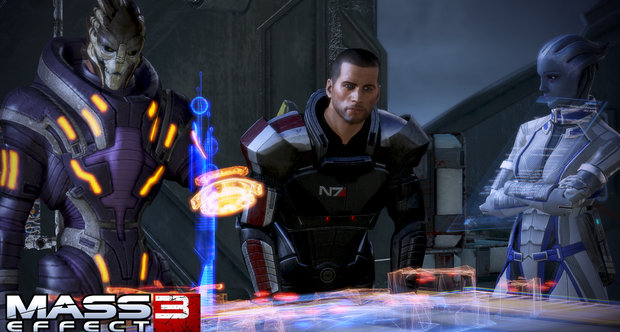 After months of rumors, yesterday we finally received confirmation that Mass Effect 3 would indeed be getting a cooperative mode thanks to upcoming issues of several magazines.  Now just one day later we get details on Mass Effect 3's co-op mode straight from Bioware's mouth.

Chris Priestly of Bioware has laid it straight out for us.  Mass Effect 3 will support four player online co-op on all versions of the game.  The mode will be separate from the main campaign and each player will create a character and choose a class from the Mass Effect universe.  Characters will level up and have persistent progression systems as well.  The events of the co-op campaign intertwine with the story in what Bioware is calling Mass Effect 3: Galaxy At War.

Join your friends in the all-out galactic war to take Earth back. The universe of Mass Effect expands with the addition of new co-op multiplayer missions, playable over Xbox Live, PSN and PC internet. Players can choose from a variety of classes and races, form an elite Special Forces squad, and combine their weapons, powers and abilities to devastating effect as they fight together to liberate key territories from enemy control. Success in multi-player will have a direct impact on the outcome of the single player campaign, giving players an alternative method of achieving ultimate victory against the greatest threat mankind – and the entire galaxy – has ever faced.

So that means nobody will be playing as Commander Shepard (or Miranda - boo) in co-op.  All of the game's single player characters won't appear in co-op in playable form.  That being said, there are hints that the co-op campaign actually effects your single player game.

The key to saving the galaxy is the “Galactic Readiness” level, measured by Commander Shepard’s ability to apply  every possible asset – people, weapons, resources, armies, fleets – in the final battle against the Reapers. Players can impact their game’s Galactic Readiness level in multiple ways via the Mass Effect 3: Galaxy at War system, including multiplayer. Other platforms and interfaces will be announced in the coming months.

Sounds like there might be Mobile, Facebook, and other social games tied into this as well.  More details of co-op are going to be revealed in the coming weeks and months.