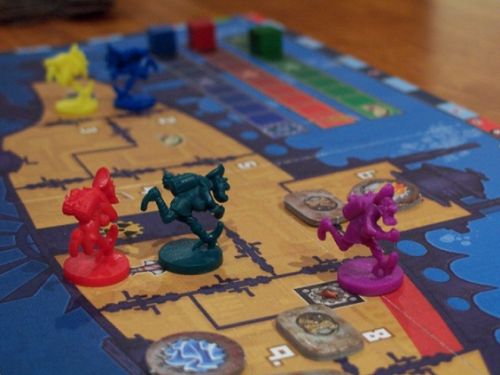 The problem with working on a submarine is that there is not much head room; plus there are sea monsters, nuclear meltdowns and crippling leaks. The solution to these issues was discovered by Fantasy Flight Games some time ago in their table top co-op game Red November - Gnomes. Fierce Wombat Games has partnered with Fantasy Flight to bring Red November to iOS, PC and Mac.

Details are currently as short on the ground as Shorty the short Gnome, known even amongst his peers to be somewhat of a small fry. What is known is that Fantasy Flight and Fierce Wombat have partnered to bring several board games and card games to digital platforms. The below teaser trailer suggests that their first game together will be none other than Red November, which is great news for co-op fans.

Gamezebo have details about the upcoming iPad version of the game that suggest the co-op elements of the table top experience will survive the transition to digital form:

A co-op game at its very heart, Fierce Wombat are promising online multiplayer – and you’ll want as many of your Gnome-loving friends as you can to help. Players will be trying to fix an assortment of never-ending problems on a sub-par submarine, from putting out fires and flooding rooms to missile malfunctions and the threat of a giant kraken that’s just waiting to devour you all!

Having played the original game I can attest that it is great fun, but it is as hard as trying to prise a flagon of Grog off a reluctant Gnome. Speaking of Grog, check out the below teaser trailer for a hint of what the game offers as well as plenty of references to the LeChuck defeating drink: