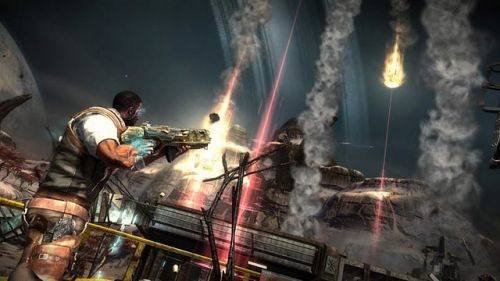 Do you know what my favorite number is?  Three, because it sounds like free!  Starhawk is an upcoming shooter that will have a 4 player co-op mode.  If that is not enough goodness for you, Senior Producer Harvard Bonin has promised loads of DLC - some of which will be free.

Starhawk finished its closed beta at the start of January and is heading towards a public beta in the next few weeks.  This should give Sony plenty of time to iron out some of the bugs that always sneak into any online gaming experience.  Bonin gave RespawnAction a pretty in-depth interview about the beta process, gleaned from this interview was the following snippet:

RA: Warhawk was known for having consistent, substantial, and in some cases, free downloadable content. While it's a long ways off, what does the team have in store for post-launch support?

HB: Actually, I can't go into specifics, but we do have a bunch of free DLC planned...and it might be surprising. We, of course, have stuff we are happy to take your money for, too! We rethought our DLC strategy and we'll reveal more about it as we get closer to release.

Co-Optimus has had some hands on time with Starhawk and it looks like it will be a polished team defence game, combining the building and destroying of Red Faction: Guerrilla, with the combat of a sci fi Battlefield 3.