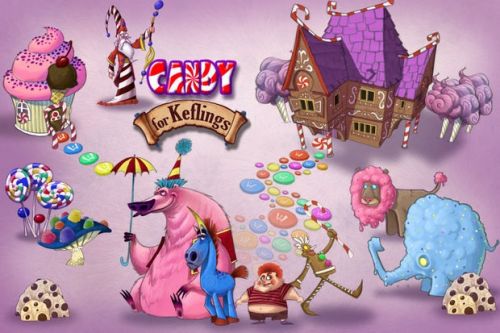 It is an eternal question that has taxed human kind since the dawn of existence, which do you prefer; Candy, Pirates or Graveyards? I love eating candy and playing as a pirate - Graveyards, not so much. My voice is just one of many, as fans of A World of Keflings can now visit playxbla.com and vote for the theme they want for the game's next DLC pack. I went for Pirates and their grog; because candy is dandy, but liquor is quicker.

A World of Keflings is a great 4 player co-op game that Co-Optimus gave 4 out of 5. Many a night I have found myself booting up the game to play for a few minutes, only to discover hours have passed and the birds are tweeting good morning outside. You can vote once a day for the new DLC and each time you do you will be entered into a competition to win t-shirts and other prizes; the biggest being a portrait of yourself Keflingized!

If you are still struggling to decide which DLC appeals to you most Ninjabee have create some handy information:

Fans can choose to vote for one of three simple themes – Graveyard, Candy or Pirate. The winning theme will be taken and built into a new kingdom that will be released as an add-on to A World of Keflings. The new themed kingdom will include a new environment, new characters, new storylines, new buildings, new resources and hours of additional gameplay.

Theme Descriptions
Graveyard
Enter the graveyard: a playfully macabre land where Zombie and Skeleton Keflings work to build a ghoulish town.
Candy
An evil wizard, a unicorn king, gingerbread Keflings and... bears?!? Come and build a new kingdom entirely out of candy!
Pirate
Visit Ratbeard's home and find him mixed up in the kef-buckling antics of his pira... that is, MERCHANT friends.