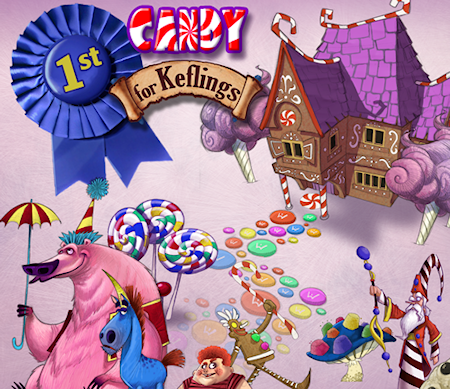 Last week, developer Ninja Bee held a little poll to let gamers choose the theme of the next A World of Keflings DLC expansion. The choices: Graveyard, Pirates, and Candy. I was a bit scared that the current zombie fad would cause the Graveyard theme to win out, but I worried for naught. Keflings players like bright, happy stuff it seems, as 'Candy for Keflings' (my pick as well) won the vote. Let's all eat some candy to celebrate!

A World of Keflings is a charming, worry-free game in which players use their Xbox Live avatars to build a variety of things with the help of tiny, kickable Keflings. It sports some fine 2 player split-screen and online multiplayer - see our co-op review for more details. The full game costs 800 MS Points ($10). The 'A Candy for Keflings' has no price or release date yet, but the previous DLC, 'It Came From Outer Space' rings up ay 320 Points ($4).