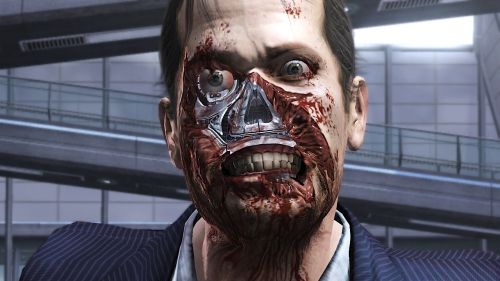 Take a quick peek at this latest cutscene, glimpsing at some of the intense storyline this game will bring:

When I look at this Binary Domain video, I see hints of Terminator: Salvation with I Robot in the mix, setting this game up to be one insanely good action thriller (among the shooter aspects, of course). Gears of War 3 lovers, however, might take official trailer offensively, as reacurring themes of post-apocalyptic, squad-based firefights looks much like Epic's flagship title (Am I the only one who thinks Cole Train's personality just took root in one of the "Rust" crew members?).

Despite the similarities between the games, the wide range of 4 player co-op and multiplayer capabilities this game will feature might, in fact, make a name for itself in the Third-Person shooter genre. Skill trees, weapon modifications,and fully destructable enviroments and enemies are all great additions to any shooter. However, the game's specially integrated system, also known as the "Consequence System", is where the game will truly stands apart from the rest.

Binary Domain will hit the shelves come next month on February 28th. Until then, you should probably just stay away from robots... and/or people you love for that matter.