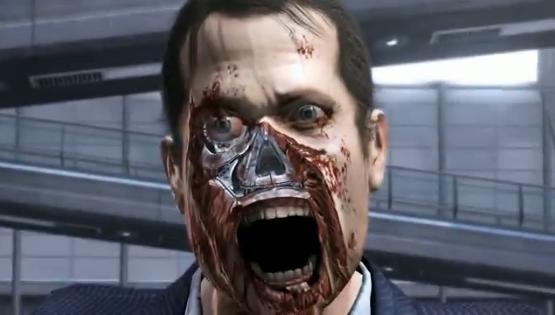 I managed to make it into a behind-closed-doors session for Sega's Binary Domain, a third-person squad shooter coming out in early 2012.  The game is set in Japan, the year is 2080.  All you need to know is this: "Robots!  Blast'em!"  Got it?  I don't want to have to explain to you why we're shooting robots during the TechnoHolocaust.  You just better damn well do it.

This was my first experience working with a Japanese translator.  Shockingly, the fact that I've seen Kill Bill, twice, in no way helped me with this interview.  Names were exchanged faster than I could blink.  I wasn't sure who I was speaking with, but I knew they worked on Binary Domain.  I was too polite (nervous) to ask anyone to repeat themselves or ask for a card.  Now for the tough part.  Figuring out if this sucker has co-op.  No small task, as every staff member on Co-Optimus knows, there are plenty of native English speakers who still have no idea what "co-op" means.

For the BCD we were treated to some game features.  You play a member of a special task force which has arrived in Tokyo to blast some bots.  Someone has made human-looking robots, and if we learned anything form the 1984 documentary The Terminator, we all know this is a bad idea.  At the beginning of each mission you can pick your team based on Trust Level and abilities.  Yep, your team has skills and abilities that can be customized.  A fellow member of the media pointed out that it looked like the Materia System from Final Fantasy VII.  The developer didn't go too in-depth into the system, but at a glance it appeared vaguely familiar. Did I say Trust Level up there?  I sure did.  One thing that was on display at the BCD that wasn't on the E3 floor was the use of voice commands.  You team was played by AI, and you could control them by giving commands.  You could also boost trust levels by responding to them.  It appears that the higher the trust level, the better the AI performance.  At one point the gentleman demoing the game asked the AI to move forward and it flatly refused.  This was part of the game.  Later, there were a few hiccups in the voice controls (the AI repeatedly asked the player to speak proper English, which was awkward and hilarious).  The game isn't due out until early 2012, so there's plenty of time to iron out the wrinkles.

Seeing all this AI bot support, I had to ask if there would be co-op.  After a little translation and some patience on part of my gracious hosts, I think I can tell you that the game will have co-op.  Four player online co-op will be supported in missions set aside from the single player campaign.  My important question was answered, so it was time to hit the floor and play the game.

When I started up the game I was asked to select a team.  I chose the two female members, because, well, I could.  When the level started one of the team members called me sleazy for selecting two women, while the other one seemed to be into it.  I chose a response from a command list (no voice controls on the floor, remember) which offended one teammate, but not the other.  The trust device was already in play.

Binary Domain controlled a lot like Gears of War.  The cover mechanic felt good and the guns had some weight to them.  Much of the demo was spent blasting away at humanoid robotic exoskeletons. These enemies did an excellent job of showing the game's procedural damage.  Enemies would continue to attack, even if they were missing an arm, both legs, or even their head.  If you took off a robot's head it would attack the first thing it came into contact with.  If you could score as headshot in a large group the resulting carnage was very satisfying.

I asked the person demoing the game on the floor about co-op.  He confirmed 4 player online co-op missions apart from the main story.  We still have no idea how the spoils of war will be split up, which I am curious to see, since gear and characters are upgradeable.

Binary Domain is a bright, flashy game with some good things going for it.  I'll be interested in seeing how the voice controls work out.  If you want to see the debut trailer you can check it out here.  And if you think there's something ironic about a team of humans, sent to destroy human-looking-robots, and all but one of those team members are controlled by AI, please, raise your hand.

Binary Domain is expected to be out February 2012 for the PlayStation 3 and Xbox 360.  The game supports 4 player online co-op.