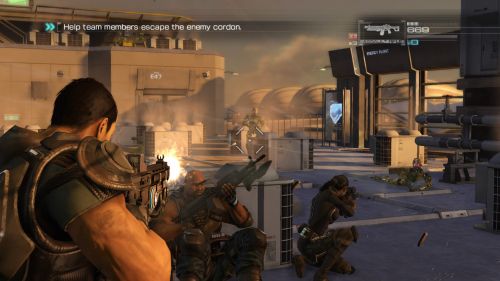 Are you a PC gamer? Do you love third-person shooters? Do you enjoy screaming voice commands into your mic that largely go unheeded by your teammates? Then I've got a game for you! Binary Domain will soon be available on PC. How soon? How about next month? Yes, Binary Domain, which happens to be a very good cover-based shooter, is coming to PC in April. You can pre-order that bad boy on Steam.

Now, you may be thinking to yourself, "But Andrew, didn't you give Binary Domain a 2 out of 5 in Co-Optimus' Co-Op Review? Did I forget to lock the front door?" First of all, don't start a sentence with "but," you philistine. Secondly, the answer to both of those questions is YES! That doesn't change the fact that Binary Domain is actually a pretty good single player game, and raccoons are now in your house. The voice commands are horrible, but in a hilarious kind of way. The co-op mode, "Invasion," is lacking, but the game as a whole is a pretty enjoyable experience. If you're looking for a fun ride featuring gratuitous robot destruction, you could do worse.

Binary Domain is out now on the Xbox 360 and PlayStation 3.  It will be out in April for the PC.  It supports four player online co-op, but that's one of its weaker features.  For more information you can check out our Co-Op Review of the Xbox 360 version.