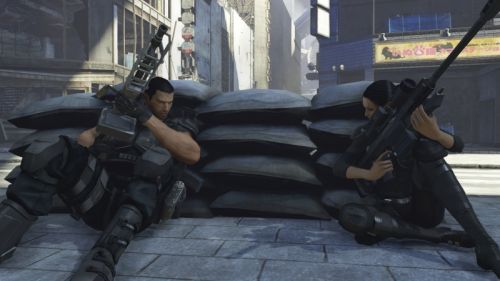 We finally nailed down the co-op mode in Binary Domain a few days ago.  Alas, 'tis but  a horde mode.  Survival/horde modes aren't all bad, assuming the gameplay is tight.  It just so happens you can check out Binary Domain's  gameplay yourself  in a new single player demo.

I played it briefly and was left with mixed feelings.  I thought the shooting was fair and I liked the procedural damage done to the robots, but the squad voice commands were touchy, at best.  The game is focused on commanding AI teammates with your voice, so you can see where that may be a problem.  You can play without the voice commands, but then things begin to get unwieldy.  You'll be doing double duty, holding a shoulder button that toggles voice commands to the face buttons.  The demo is available now on the Xbox 360 and PlayStation 3.  If you get a chance to play it, let us know your thoughts in the comments section.

In weird cross over news, Siloconera reports that characters from Yakuza: Dead Souls will be available as multiplayer skins in upcoming DLC.  I guess it's no stranger than having Frank West show up in Lost Planet 2.  We couldn't confirm if these new skins were only for the Japanese release, or if Sega was spreading the love Stateside.  Either way, this DLC is priced right at exactly $0 bucks, or 0 Microsoft points.