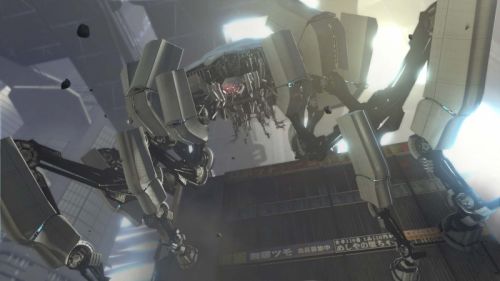 We have been pondering the features of Binary Domain's co-op mode since last May.  The third person shooter focuses on a robot uprising in (where else?) near-future Tokyo.  The single player campaign features a "Consequence System" where you will give voice commands to your squad mates.  They'll either listen to you or they won't, depending on how much they trust you.  Great.  Sounds like it'll be just like playing a game with a bunch of house cats.  This seems like the perfect opportunity to allow real life human players to join in the fun.

We've played the single player game on more than one occasion, and have yet to nail down the co-op features, even when pumping game reps for information.  This latest video doesn't help at all, but it sure looks cool.  It features some of the mulitplayer versus modes, two different factions, five different team members, and zero co-op information.

Alright. That was cool, but what about the co-op?  We contacted Sega for more information.  A representative quickly replied to our query:

In terms of multiplayer, there are a variety of team-based modes, including old standards like team death match and team survival. There’s one mode, called Invasion, where players must work together to defeat progressively harder waves of robot attackers (a la “Horde” mode). This game mode supports up to four players at a time.

There you have it!  A survival mode.  We'll see how the gameplay holds up when it releases later this month.

Binary Domain will be out on February 28th for the Xbox 360 and PlayStation 3.  It will support four player online co-op.