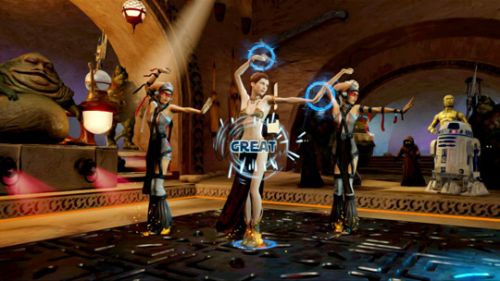 Kinect Star Wars may have been delayed, but it's finally arriving on April 3rd, as well as its limited-edition console bundle. Unfortunately, this is two days late to be an April Fool's joke, because the rumored Galactic Dance-Off mode will be coming along for the ride as well.

Admittedly, while the idea of a Sy Snootles simulation isn't that far-fetched, something just doesn't seem right about being able to dance battle against Darth Vader while Star Wars-themed pop music plays in the background. I know it's some sort of requirement for Kinect games to come with either an exercise or dance mode these days, but it just seems so... cynical.

Aside from providing the most geek-tastic dance mode, Kinect Star Wars comes with four other modes of play:  Jedi Destiny, Rancor Rampage (which is unfortunately not a reskin of the classic Rampage), Podracing, and Duels of Fate, where you square off against "iconic" Star Wars villains. The game will also support 3D for those of you who like to sear your eyeballs in the comfort of your own home.

For those of you who cannot wait until April, select AMC theaters will be offering a playable demo beginning this Friday, coinciding with the release of The Phantom Menace 3D.