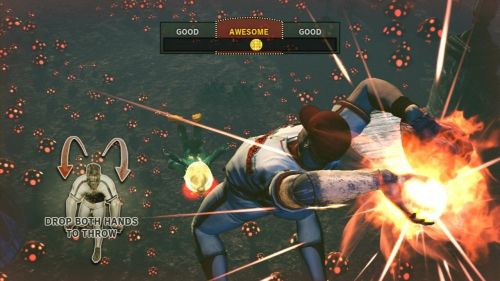 March was jam-packed with co-op games. April... not so much. Hopefully some smaller titles will be announced as the month goes on, or it's going to be a sad, lonely spring. Aw, hell, I guess we could always go outside.

Kinect Star Wars (360) This tweet sums up my thoughts. Please, share your opinions in the comments section. NO CURSING!  2 player local co-op

Diabolical Pitch (XBLA) This Kinect title is from Grasshopper Manufacture. This is their webpage. They're insane. Throw fake baseballs at demonic enemies with a pal. I wonder if my insurance covers rotator cuff surgery... 2 player local co-op

Shoot Many Robots (PC) The PC version of this excellent side scrolling shooter loses the local co-op feature but gains some awesome Valve gear as well as mouse and keyboard support. Check out our review of the console version for a hint of what you can expect.  4 player online co-op

Below you'll find the retail games coming out this week, complete with handy-dandy Amazon links. If I missed something, do me a favor and mention it in the comments section. Thanks!