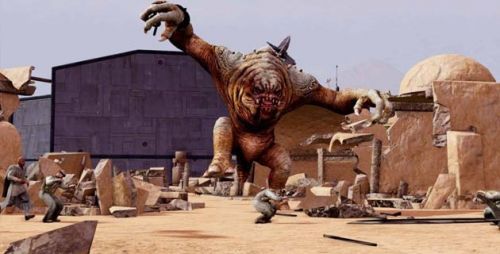 When I turned 7, my Dad threw me a Star Wars themed birthday party. This consisted of all the kids dressing up as Star Wars characters and chasing my Dad (playing Darth Vader) around the garden with rolled up newspapers. Nothing I have seen since has come close in terms of re-enacting the original Star Wars trilogy (certainly not the second trilogy), but Kinect Star Wars has the potential. Two new preview videos have surfaced that give an impression of what the game will provide.

For footage purists the first video is from Zoomingames and consists of over 5 minutes of preview video they sneakily recorded at a show. Many of the different levels in the game are shown and the graphics do look good:

The second video is an exclusive from Xplay and consists of preview footage, an interview with shaded Kinect overlord Kudo Tsunoda and lots of advertising for the upcoming Kinect Star Wars 360 bundle. This video is far better produced than the first, but I do like some guerrilla footage when I get the chance:

Kinect Star Wars will have 2 player local co-op in at least one of its game modes and is due out 3rd April. What the footage does not show is how this co-op will work or whether the Kinect features have been implemented well. Is this the first pure Star Wars experience I will have since 20 of us beat my father? I'm not sure, but it does look like a good game to play as a group or with the family.

The force will be strong with Co-Optimus when any news about the co-op elements of the game are released, be sure to return young padawan.