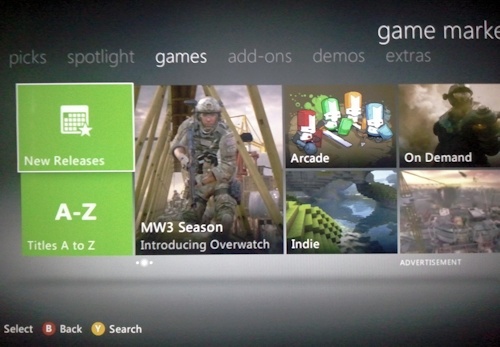 When I fired up my 360 this morning I noticed there was a new dashboard update.  After a quick jump to Major Nelson's blog, apparently this was to fix some color issues as well as add performance improvements.  But Major Nelson is a damn, diry liar.  It also changed up the game marketplace, something we've seen complained about before.

What exactly changed?  Gone is the infamous "Game Type" icon, which buried titles beneath another layer of tiles.  Instead Arcade, On Demand, and even Indie are the first options when tabbing into the games section of the marketplace.  Best of all, the actual Indie Section is more organized now adding sub categories of New Releases, Most Popular, Genre and an A-Z listing.  And despite our disdain with all the ads on the new metro dashboard, there are ads in the Indie section...FOR THE INDIE GAMES.  Sweet lordy it's a miracle.

Now we just need to get a dedicated co-op tile on the marketplace!

Combine this news with the recent news of a Windows Phone 7 app and it seems Indie Games on Microsoft's platform could see a nice boost in exposure.  As someone developing an indie game, this makes me very very happy.