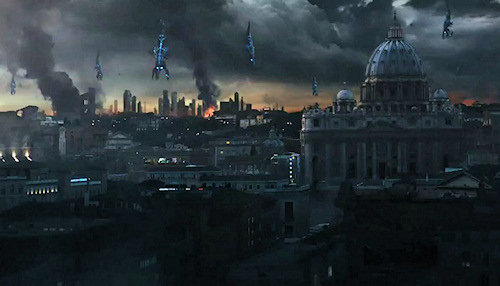 We've got three trailers today for Mass Effect 3 each bringing something new to the table.  The first trailer was revealed this week during The Walking Dead, it was a 60 second live action trailer that sets the mood for the game.  Yes the reapers are coming, yes Commander Sheppard is the only one that can stop them, yes violins are sad.

Our next trailer is the one that gives us hope.  It's rendered using in game footage and is called "Take Back Earth" and we've seen glimpses and pieces of this over the past few weeks.  Now together as one solid 3 minute piece of hype, we get a new perspective on things.  Lessons learned from this trailer?  Don't leave your kid in a sunflower field during an impending alien invasion, stay clear of giant metal spikes protruding from the ground, and Command Sheppard likes to jump in slow motion.

Our final trailer isnt' actually for Mass Effect 3, it's for Mass Effect 1 and 2.  British Rapper Dan Bull brings you up to speed on the story so far in the Mass Effect universe and how we got to where we are today.  Lessons learned from this trailer?  Dan Bull is a lyrical vanguard.

Mass Effect 3 is out next Tuesday, March 6th on the 360, PlayStation 3 and PC.  The game supports a four player online co-op mode. that is separate from the story.