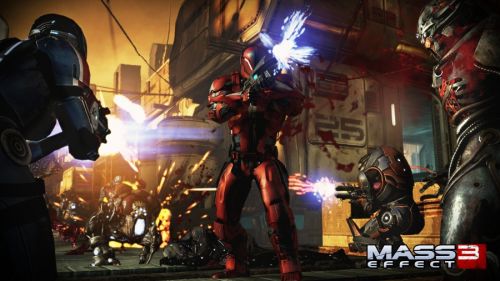 First and foremost: there will be no plot spoilers in this post.  There. That's out of the way.  By now you've probably heard that the Mass Effect 3 demo has dropped.  This little glimpse will allow players to experience two story missions from the main game as well as engage in the franchise's first attempt at cooperative play.  Nick and I played a few rounds the other day, and we're happy to report that the co-op mode is accessible, addictive, and most of all, fun.

I'm not a Mass Effect fanboy.  Heck, I'm not even a Mass Effect fan.  I bowed out after the third dune buggy mission from the first game and never looked back - until now.  I dove into the Mass Effect 3 multiplayer not knowing a Vanguard from an Adept, and I had a blast.  I also got my rear end handed to me, but that's what friends (and revivals) are for.

The first thing that hit me when I started up the four player co-op mode (online only) was the amount of options. For example: there are six classes to choose from.  Each class has one character  who is immediately playable as well as three additional unlockable characters.  Each character is then individually customizable, featuring their own skill trees, gear, color schemes, and upgrades.  There will be plenty more to tinker with in the full game, including stages, enemy types, and difficulty.  This is, without a doubt, one of the deepest wave-based co-op modes I have ever played. Once the match begins you'll battle waves of enemies while trying to complete objectives.  These range from simple survival, to computer hacking, to killing specific targeted enemies.  I thought the shooting felt tight, and the melee moves were appropriately brutal.  It was easy to revive downed teammates, as well.  The levels themselves were a little on the small side, but we only played through two different maps.  More will be available in the full game.  When the match was over each player received the sum total of the entire team's XP.  That was nice, because Nick was seriously out-playing me.  While I don't know if Mass Effect 3's co-op mode was good enough to tempt me back into the series, I enjoyed my time with it.

Nick's take: I think the thing that's most surprising about Mass Effect 3's co-op mode is how well it could stand on its own.  As part of a bigger universe rich with lore, the co-op doesn't do much in the demo to present that.  So while fans of the series might find that a bit of a let down, it also makes it much more accessible.  The really great thing I saw was just how much customization and strategy will come into play for your character builds.  Things like choosing weapons based on weight which can affect recharge time of abilities and choosing what abilities to bring into battle will add lots of replayability and co-op strategy.  I was also impressed to see the XP system is co-op based as well, so it's not only how well you do but how well the team does.  Overall the actual gameplay felt tight to me, like a smoother version of Mass Effect 2's combat system.  It's got a touch of Gears in it thanks in part to the cover system and blind firing, but who ever thought you'd see curb stomping in the ME universe?

The bottom line:  Play the multiplayer demo.  The co-op is spoiler free, it doesn't cost anything, and it's available to everyone starting tomorrow on XBL, PSN, and PC.  Even if you're not a Mass Effect fan, this is a fun and surprisingly deep third person shooter experience featuring addictive character progression.  If you are a Mass Effect fan, consider this co-op mode bad-ass icing on your awesome cake.  Check out the following video for a taste of the action.

In other Mass Effect 3 news:

The Mass Effect 3 PC version will not support game pads. This should come as no surprise, since BioWare neglected controllers for the PC editions of the previous Mass Effect games. (Eurogamer)

If you pre-order Mass Effect 3 through EA's Origin service you will receive a free downloadable copy of the PC version of Battlefield 3. (Origin) There is an opportunity, however so slim, to get the full game early.  Next week EA will be launching copies of Mass Effect 3 into the upper atmosphere using weather balloons.  The launches will take place in New York, San Francisco, Las Vegas, Berlin, London, and Paris.  No love for the southern hemisphere.  You will be able to track the balloons' locations via GPS through masseffect.com.   Hunt down the wild (and possibly irradiated) copies and the game is yours!  (USA Today)