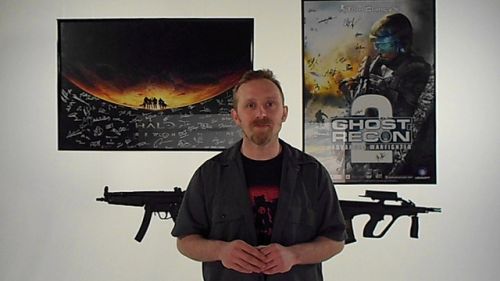 "KickStarting" is all the rage these days in game development.  It's the idea that you can connect directly to your potential customers while a product is in it's earliest phases of design and conception.  These users invest in your project, which in turn, you use the money to fund creation.  As an incentive, you give these people perks, much like people who buy collector's editions of games get, but on a whole new level.

The latest game to try this is being touted as a Hardcore Tactical Shooter created by new studio Serellan LLC. The studio is headed by industry veteran Christian Allen who worked on such titles as Ghost Recon and Halo Reach as well as working at Ubisoft, Red Storm Entertainment, Microsoft, Bungie, and Warner Bros. Games.  With such an impressive resume and a small team of developers with equally impressive resumes this project has potential.

But what is it?

This game will get back to the core of what is loved about the tac-shooter, featuring realistic weapon modeling, outfitting and commanding your squad, objective-based, non-linear missions set in real-world locations around the world, single player, co-op, and multiplayer.

It's a tactical shooter for tactical shooter fans.  For folks who love and remember the ORIGINAL Rainbow Six on PC 15 years ago.  It's a game that eschews the cinematic flair of today's games in favor of hardcore gameplay and realism.  From a cooperative perspective, it sounds like it's definitely on the table and could be an amazing addition.  There's no word on platforms, though it sounds ilke PC is an obvious choice.

So why should you invest?  There's lots of interesting looking perks up till the $1000 level, including the ability to actually submit user created content, vote on weapons, and special thank your's in the credits.  But the really interesting perks start at the $1000 level.  At this level you'll be able to participate in conference calls with the team to help decide the direction of the game.  Quite a unique and open way to do game development.

The team is looking to raise around $200k with the current amount set around $30k.  So hit up the KickStarter page and fund away if this sounds like your cup of tea.