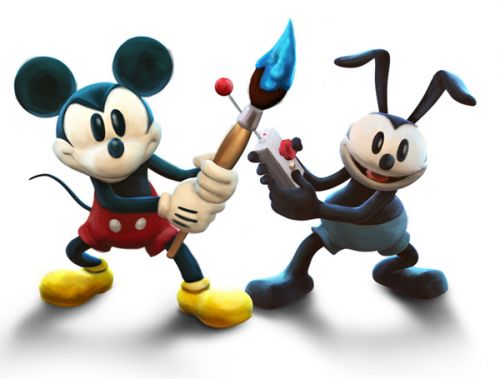 Disney’s upcoming co-op title, Epic Mickey 2: The Power of Two hits shelves later this fall. In the mean time, Disney Interactive Studios and Creative Director, Warren Spector, have decided to release a behind the scenes look at Epic Mickey 2. In this video, they feature both the main characters, Mickey and Oswald, and give us a small overview of what sort of co-op aspects we can expect to see from these two former rivals.

With the return of the Mad Scientist, Oswald and Mickey must team up and work together to help navigate their mysterious, artistic world and put a stop to his diabolical plans. Using Mickey’s magic paint brush to reshape the environment and Oswald’s electricity remote to command machinery, both character’s unique powers help mold the co-op play of Epic Mickey 2 that was previously unseen in the Epic Mickey franchise.

This new co-op twist added to the former Epic Mickey gameplay gives those who have played the previous installment an opportunity to explore their world in a whole new way. Being able to easily drop in and out of co-op is also a very nice feature Disney Interactive decided to add in; this game was made specifically for co-op play, especially for those who love to play games with their kids. Oswald's "helicopter ears" remind us of another dynamic duo...

This game also features the characters (especially Oswald) now with complete voiceovers, having them talk to players throughout the entire game. Played out much like a musical, players will be given a solid Disney experience that has yet to be utilized in a full, fledged Disney game. Any fan of Disney shouldn’t miss out on Epic Mickey 2.

Although no official date has officially been announced by Disney Interactive, they plan to have Epic Mickey 2: The Power of Two released by September this year on all major platforms.