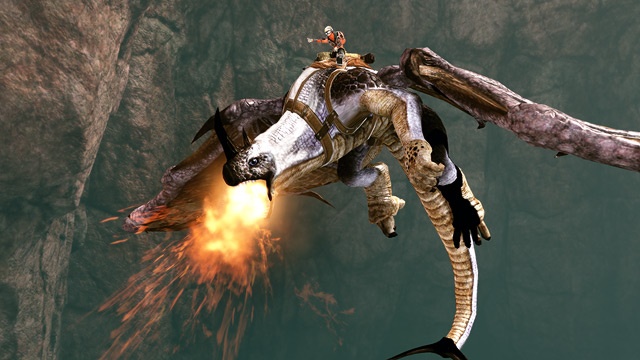 Crimson Dragon, the sequel to Panzer Dragoon in everything but name, now has an official Japanese site. And with that site comes a few new screenshots as well as higher-quality versions of the ones originally provided by Famitsu. Additionally, the game's dazzling trailer (previously glimpsed via camcorder video on YouTube) is available for download to Xbox 360s with a Japanese Xbox Live account. Siliconera has kindly uploaded the trailer for all the world to see.

With so many Panzer Dragon alums involved, it's no wonder the game adheres extremely closely to SEGA's fondly-remembered series. Seeing the game in action has got this old Sega Saturn fan chomping at the bit to climb onto a dragon and start blasting monsters once again. Let's just hope the Kinect controls can keep up with the game's fast action and ambitious visual designs.

Crimson Dragon is a rail-shooter that supports 3 player online co-op. It will debut on Xbox Live Arcade sometime this year.