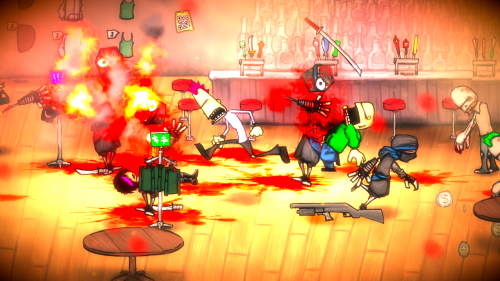 Ska Studios has given us some fantastic co-op games, including the XBLA titles The Dishwasher: Dead Samurai, The Dishwasher: Vampire Smile, and XBLIG I MAED A GAM3 W1TH Z0MB1ES 1NIT!!!1. The small studio (we're talking two people) is hard at work on their latest bloody adventure, Charlie Murder. We don't know much about the game other than that it supports four player drop-in co-op. The previous Dishwasher titles had both local and online co-op, so our fingers are crossed for combo co-op. We do have a kick-ass video to show you. Enjoy.

We first saw Charlie Murder at PAX East in 2010, where Kat went hands on with the game.  Ska Studios put the game on hold while they worked on a Dishwasher sequel, but once that wrapped up, things went back full force on the game.