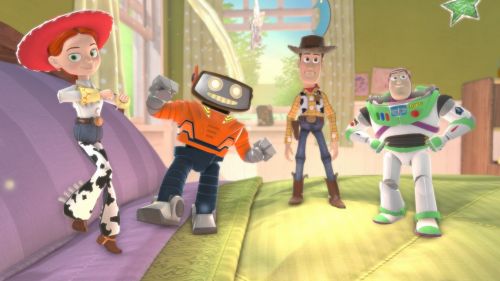 Publishers release demos of new and upcoming games all the time - it's expected these days. But French developer Asobo and Microsoft have done something unusual for Kinect Rush: A Disney Pixar Adventure. They've released a Kinect Rush-themed Kinect Fun Labs gadget called Kinect Rush Snapshot. Not only is Snapshot free, but the included Achievements make it worth downloading even if you already own the retail title.

Kinect Rush Snapshot expands on the main game's ability to 'scan' the user's body and produce avatars that match the looks of various Pixar movies. While the avatars don't vary much between one person and the next, it's still a novel idea that kids are bound to enjoy. Snapshot also builds on the original scanning feature by allowing players to compose pictures with their avatars and actual Pixar characters like Buzz Lightyear and Woody. You can then share those pictures online. Like most Kinect Fun Labs gadgets, Snapshot is completely free to download and includes 50 GamerScore worth of Achievements. Actually locating Kinect Fun Labs gadgets after theyre downloaded is unnecessarilly challenging though. The easiest ways involve either viewing your download history or performing a Bing search and then choosing to Play Now. If you have a Kinect and love Pixar movies (or Achievements), Kinect Rush Snapshot is probably worth the effort.

Kinect Rush: A Disney Pixar Adventure is a 3D platformer that features Kinect controls and 2 player split-screen co-op. In our co-op review, I found the motion controls a bit more challenging than usual, but loved the visuals, sound, and level design. As for Kinect Rush Snapshot, it's available for free right here.