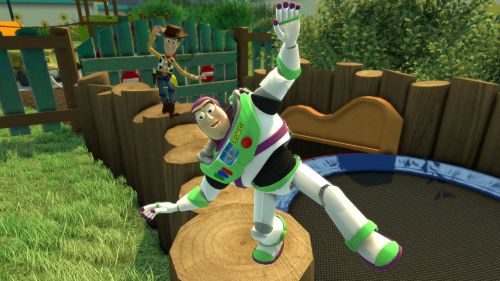 When the Wii opened up the whole "casual" gaming venture to the consoles (what feels like) many years ago, Disney seemed like a natural fit with this crowd. Afterall, they'd already been releasing plenty of tie-in games and other forms of interactive entertainment for years. The release of the Kinect, then, was yet another platform for the world's most famous mouse and all of his friends to hop onto to spread fun and cheer to the world. Kinect Disneyland Adventures was the first release to utilize the new motion controls, and coming out of this year's CES event, a new co-op title for the family has been announced featuring characters and environments from five of Pixar's films - Kinect Rush: A Disney•Pixar Adventure.

Not a lot of information has been announced just yet about what all the game will entail, but it sounds like it'll largely revolve around minigames/puzzle-solving gameplay. From the official press release:

“Kinect Rush: A Disney•Pixar Adventure,” invites families and fans of all ages to experience the worlds of five beloved Disney•Pixar films like never before. Through the magic of Kinect for Xbox 360, scan yourself into the game to become a unique character in five Pixar worlds. Team up with characters from “The Incredibles,” “Ratatouille,” “Up,” “Cars” and “Toy Story” to solve puzzles and uncover hidden secrets.

For the first time in Kinect history, you and your favorite Pixar character can interact on screen and play cooperatively to solve challenges. Use your voice and body to seamlessly move from fast-paced puzzle-solving to moments of pulse-pounding agility and speed.

The game has a release date of March 20, 2012 - a good date to reconnect with your family after spending time supporting Commander Shepard in his fight against the Reapers.