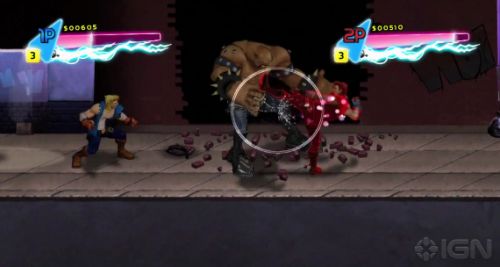 While we're still waiting on the XBLA-exclusive Double Dragon II remake from Korean developer Gravity Co, Ltd, a separate team on the other side of the world has set their sights on remaking the original Double Dragon for both XBLA and PSN. The new game, Double Dragon: Neon comes from Wayforward Technologies (makers of Batman: The Brave and the Bold and Contra 4) and Majesco. Like Double Dragon II: Wander of the Dragons, this one uses the original game as a template, switching to a 3D engine and revamping the actual fighting mechanics. Neon takes many more creative liberties with the source material, and thus Majesco calls it a "radical reinvention" rather than just a remake.

The first thing you'll notice when watching the minute long teaser trailer is Double Dragon: Neon's distinctive new look. Wayforward is going for eighties nostalgia here, with bright neon life bars and era-appropriate dress. Characters are rendered in a slightly cartoonish art style, bosses like Abobo looking much more exagerrated and threatening than before. The trailer features the classic mission one theme music; hopefully the rest of Double Dragon's memorable tunes make it into the game as well.

Why call Double Dragon: Neon a reboot? Well, the story and scope of the game have taken a turn for the bizarre. Marian still gets kidnapped at the beginning, prompting martial arts masters and brothers Billy and Jimmy Lee to embark on a rescue mission. Their enemies - now called the Black Dragon Clan - are lead by "a supernatural scourge" known as Skullmageddon. Billy and Jimmy will travel beyond the earth itself in their mission to stop him. Honestly, I don't know what to make of the new story elements just yet. It sounds like they're trying to set up a future Battletoads crossover, which could be cool.

Double Dragon: Neon features 2 player local and online drop-in, drop-out co-op. It's scheduled to arrive on Xbox Live Arcade and Playstation Network sometime this summer. Co-Optimus will have more details soon. In the meantime, check out the game's teaser site and Facebook page.