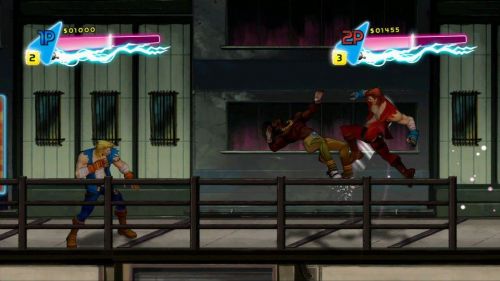 Coming to XBLA and PSN with a 1980’s flair, Double Dragon Neon rewinds the side-scrolling beat'em up genre over two decades to bring us a co-op game worthy of a chest bump.

Mixing punches and kicks to stun, throw, and finish your opponents, Double Dragon Neon is the revival of the genre at its core. Taking much from what Double Dragon established, games like Castle Crashers and Scott Pilgrim vs. The World are the modern evolution of this classic video game. If you were too young to even remember the Double Dragon series, don’t worry about having to get acquainted. IGN made a video specifically to fill you in on how the franchise got to where it is today:

Putting you and your partner in the shoes of Double Dragon’s timeless heroes, Billy and Jimmy, the goal once again is to rescue your girlfriend, Marian, from being kidnapped by common street thugs looking for a fight (It’s never really clear which girlfriend she actually belongs to). What may look like an old 80’s game with a new makeover won’t give Double Dragon Neon much justice. To explain why, G4TV came in and broadcasted a taste of what is to come out of Double Dragon Neon this summer.

This major upgrade to the original Double Dragon will bring some new components that help modernize the experience, such as bright neon graphics, online co-op, drop-in drop-op co-op capabilities, a character upgrade system that uses “mixtapes” to customize load outs, and initiated combo attacks/buffs through high fiving (the bromancing in this series is legendary). Some classic elements, such as the music and baddies like Abobo, will stay constant and give old school fans of Double Dragon another reason to relive the past. Double Dragon Neon will be making its exclusive debut on XBLA and PSN this coming July, so don’t forget to mark your co-op gaming calendar.