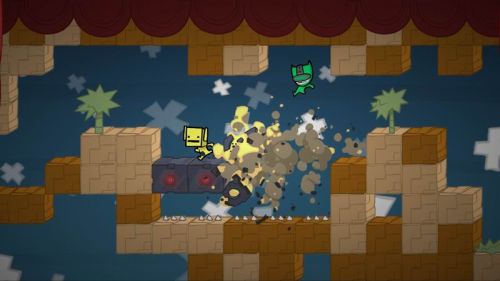 The Behemoth's Castle Crashers is by all accounts the perfect arcade style co-op game this generation.  It offers catchy visuals, accessibility, and addictive gameplay elements that keep you coming back for more.  When I first saw BattleBlock Theater, the next game from the developer, I wasn't quite sure what to make of it.   It just didn't have that look that sucked you in that Castle Crashers had.  This is definitely a different game and my time with it at PAX East has given be a better understanding of just what BattleBlock Theater is...and isn't.

The story of BattleBlock Theater is a zany one.  It involves an evil hat, even more evil cats, and a prison that forces players to put on a show for said evil hats and cats.  These deadly plays are the core of BattleBlock Theater, with planned 100s of levels of play as well as numerous game modes.

The core of the experience is a platformer with some minor co-op puzzles.  You'll be jumping from block to block, avoiding deadly moveable objects, spike traps, lava pits and all the usual environmental things headset on destroying you.  You'll also have to avoid the evil cats along the way and you'll want to keep an eye out for gems and yarn, as this is the game's currency.  Yup...yarn...to bribe the cats.  Makes sense to me.

Your character is a mish-mash of shapes and objects that you'll unlock along the way, customizing your head, body and some accessories.  I chose a dude with a round head and baseball hat.  My partner had a pyramid head, no, not that one.  I was told there would be 100s of these customizations to unlock and if you so desire,  trade.  There's going to be a built in trading system so you can trade for customizations and items you want for your character.  It's really very impressive, remember, these are all hand drawn objects and not computer generated imagery. We played through a few levels in co-op.  Among the things you can do to work together are jumping off each other to reach higher places, pulling a friend up to a higher ledge by extending an arm, and tossing them across chasms to reach places you couldn't otherwise reach.  The puzzles included switched based ones that required both players to hold a switch down to either progress or get a special item.

The entire time you play you're actually on a stage, as is evident by the silhouetted cats and curtains that surround the play area.  The more I played BattleBlock, the more the overall style became apparent to me.  It's like a series of inside jokes and internet memes wrapped up into a platformer - and suddenly it became hilarious in its own way.

BattleBlock Theater supports two player local co-op or two player online co-op play through the main levels.  We were also told there will be numerous extra modes to play, but details on those - which include versus modes - weren't revealed just yet.

So what is BattleBlock Theater?  It's a much slower and deliberate game when compared to Castle Crashers. It's actually a more cooperative game because to progress through levels you'll need to work together.  There's no release date yet for the game, but I imagine we'll be seeing BattleBlock Theater sometime this year on XBLA.