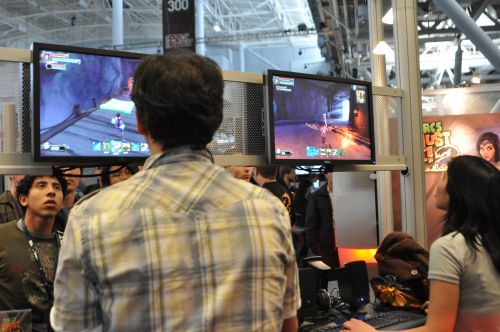 I was a huge fan of the original Orcs Must Die!, a tower defense like game from developer Robot Entertainment. It combined the unique strategy that tower defense games offer along with the action of a 3rd person shooter and splashed on a really attractive style. Sadly one thing felt missing and that was co-op play. But Robot Entertainment has heard the cries of its fans and will be including cooperative play through the game’s sequel in Orcs Must Die! 2. At PAX East Tally and I went hands on with PC version of the game, and even though the first game hit XBLA, we were told not to expect the sequel to.

Players can choose from the War Mage or the Sorceress and the two player co-op play allows you to double up on characters if you wish - that means you can have two of each during a mission. While each character does have some unique abilities and traps, the large majority of the returning traps from Orcs Must Die! are shared between the two classes.

During our hands on time with the game at PAX East 2012 both Tally and I sampled each character. The War Mage is your tank-style character loaded with a shotgun that also doubles as a grenade launcher. The Sorceress has a stave that shoots but also can charm an enemy to fight for the player’s side for a short time.

One of my biggest gripes with the first game was the constant running back and forth between the spawn doors, something that I felt co-op play could help alleviate. What was interesting in our play time was that, not only were the maps slightly redesigned to lessen this effect, but there was an ebb and flow to us covering each other. So while I had the higher area covered and then secured, I could see Tally fighting down below needed some backup and was quickly able to make my way over to help mop up those enemies.

Overall, Orcs Must Die! 2 brings everything back that we know and love from Orcs Must Die!, but with added polishes and details to just about everything. For example, there’s a new type of item added to the arsenal: trinkets. They have a persistent passive effect with an active effect as well (the one we saw passively healed the person who had it equipped and they could activate it to globally heal both players). These types of details help facilitate players to work together even if they’re not right next to each other on the map. There’s also a lot of little touches in the levels that really bring things to life. One set of levels we saw had moving mine carts that could run into the Orcs and if you wanted, you could have it switch tracks between areas for a little extra defense. It was really satisfying to see it smash into groups of enemies and sending them flying over the edge of a cliff. There’s even some slick traps like the boulder shoot which is a last ditch effort to defend yourselves by dropping a sack full of boulders from the ceiling.

Speaking of the enemies, Orcs now come in three flavors - light, medium and heavy. Combined with the visual style differences there’s a greater variety of enemies to face off against and it mixes up the pacing pretty well. We were told that several new creature types will be making an appearance, with design inspirations coming from their abilities. For instance Trolls would be based on regenerative powers.

Overall it’s easy to see Robot has put a lot of effort into crafting strategy and action oriented co-op experience. It’s the little things that end up going a long way - like the way the game waits for both players to be ready before unleashing the hordes of orcs - that make it feel very polished already. We were also told Orcs Must Die 2 will featuring scaling difficulty for co-op.

Our time with Orcs Must Die! 2 took us through two sets of levels and Tally and I came out victorious on both. The game retains the charm of the original while polishing almost every aspect. A new combo system, new unlocks, plenty of new traps and of course co-op help contribute to a fine looking sequel when it hits digital download services on the PC this Summer.